This walk through the Khari Baoli or Kahro Baoli would be a chef’s delight. And any food lover’s dream walk. As it takes you through the biggest spice market in Asia or maybe the world. Along with this, we go through a famous mosque which is a landmark in the old Delhi area. Some old gates, Ghalib’s Haveli and my chance discovery of some signs of the freedom movement. And some very old temples in the narrow lanes.

Mirza Ghalib’s haveli is where the most famous poet of Delhi spent his last few years. It is located in a narrow Gali called Gali Qasim Jan in Ballimaran. You may have heard this name in Gulzar’s poetry and in his songs like ‘Kajrare’. This is where Ghalib lived and wrote about Delhi and its people. A part of this haveli had been recently acquired by Delhi Government and converted into the museum for the poet. Funnily the road leading to Gali Qasim Jan, where this haveli is located is full of Shoemakers. You have rows of shoes of all kinds and shapes looking at you as you walk through Ballimaran.

It is a minimalist museum with a synopsis of Ghalib’s life and chronology of events as they happened in his life. Some of his famous poems, a life-size model of him with his pen and a replica of utensils that he might have used. There is a showcase with his books. I wish they had a facility to buy his books in popular languages. There is a chart showing his contemporary poets and important men. There is a lone portrait of his which is usually seen in anything that refers to Ghalib. This is a place where the poet lived for about 9 years of his life. I wonder where all did he live the rest of his life in Delhi. It looks like that he was always well patronized by noblemen. But somehow he always lived and eventually died in debt.

The tomb of Ghalib is in Nizammudin, outside the dargah of Hazrat Nizammudin. The same is also being refurbished these days. And should have the grandeur that the poet deserves in the next few months. As you come back to Chandni Chowk from Ballimaran, you would see a huge white colored Haveli. This is said to have belonged to Chuna Mal. It is said that the Haveli was always brightly lit. And Ghalib had written about the same enviously.

The Fatehpuri Masjid, a mosque built by and for a Begum of Shahjahan, marks the end of Chandni Chowk the lane that connects Red fort and this Masjid. It is said that the road was actually a canal with fountains through the road. And there were gardens around the canal and fountains. So on a moonlit night, it would almost seem as if the sky and come down on earth. I assume the name must have come from the illumination that the moonlight created here. Today, of course, this is nothing but a piece of nostalgia for history lovers. And a commercial hub for people who earn their livelihood from here.

Fatehpuri Masjid is also one of the landmarks that survived the various attacks that Shahjahanabad has suffered at the hands of various invaders and fighting princes. It is also a big mosque though it appears small from the outside, with an unusually shaped water tank. The ASI board informs that this tank was shifted into this Mosque from a Nawab’s house. It also says that the mosque was privately held until the British made it public in the late 19th century. This is the second pink colored mosque that I saw in Chandni Chowk. The other one being the Shahi Bagh Masjid besides the Townhall.

It is a relatively simple mosque in the traditional Mughal colors of Red and white and with red sandstone and white marble. There are rooms on the ground and the first floor around the masjid, which I assume may have been used as a Sarai for visiting the population of the area.

One gate of the mosque opens into Chandni Chowk and the other into Khari Baoli. The mosque authorities have put a board to prohibit people from using it as a thoroughfare to avoid the crowded roads outside.

If you take the road towards the right of Fatehpuri Masjid, you are in Khari Baoli. The biggest spice market, and you would see all kinds of spices, nuts, and herbs on display here. It is said that any Spice available on the planet can be found here at Khari Baoli. The name of the street indicates that there must have been a step well here and its water would have been salted. Some sources say that there was a step well. And it was used for washing the cattle. But today there is no trace of any step well here. As you walk the street, you would see spices displayed outside the numerous small and big shops.

Interestingly the shops here are known by their number rather than their names or the owner’s name. Though the traders prefer to deal with the wholesale buyers, they do entertain the retail buyers too. You can buy all kinds of pickles and chutneys here along with dry spices. It’s a delight for any cook to be on this street.

Few meters down the lane on the left-hand side is a metal gate that would lead you to Gadodia market, which is the hub of this spice market at Khari Baoli. It may take you some time to enter the market as there is a constant flow of manually pulled loaded carts porting the sacks of spice too and fro. The speed of these Carts is fast enough to scare you and keep away.

The narrow gateway opens into a huge market where you see sacks and sacks of colorful spices. The red chilly and turmeric provide the brightness to the market. It seems like this place must have been a huge haveli belonging to some rich family. The parts of the haveli have been sold to merchants and the whole haveli with all its 4 floors has been converted into a storehouse or godown for the spices. For a small fee, a person took us to the top of the Haveli. After taking the 120 steep steps, we were exhausted but the view from the top was worth it. The huge roof of the Haveli had the traditional domed canopies on all sides.

The place seemed perfect for a kite flying competition, and we did see a few kites lying here and there. It looked like a perfect place for film shootings, to depict a bygone era. From here you could see the world outside and inside the haveli. Outside, you see all the landmarks like red fort, Jama Masjid, Fatehpuri Masjid and the streets around. Inside you see the rows of spices and the stream of people walking by, standing, checking out the spices, negotiating, loading, unloading and just lost in their everyday business. Huge central open space of the haveli has also been covered by building shops and creating a complete market inside.

The Haveli must have been very beautiful at some point in time. Even now it eludes certain grace that you can feel when you look at the somewhat preserved corners of it. You may want to cover your nose when you are here, otherwise, you are bound to come out sneezing. And the locals would look at you and smile.

The chance discovery of this walk was Dhumimal’s Shivalaya, an old Shiva temple in Katra Nal, a by lane of Chandni Chowk. This was built by Dhumimal Khatri in 1850 according to the MCD board. This is a small temple which you have to request the shopkeepers outside to open it for you. Close by is a similar Kali temple with marble exteriors and two lions guarding the gates, which was closed when we were there. Another board tells that at this place in 1942, during the Quit India movement, a lot of protesters were killed and injured. This board now serves as a temporary wall of a shop. There is an arched gate that leads to this lane. Within one of the gates of this gateway, was an Aaloo Tikki shop, another example of the small format retail.

Across the road, look at the Allahabad bank building, which is also a heritage building and tells you about the architectural tastes of those days. This is a small walk but has a lot of points where you can stop by and spend some time. So, go and enjoy this appetite inducing walk…

Recommend you to read the following travel blog on Places to visit in Delhi.

Walk through the Lodi Gardens

In & around Purana Qila

Walking on the walls of Lal Kot

Walk through the North Ridge of Delhi

Laad Bazaar – The Bling, Brand Or Bread Of Hyderabad 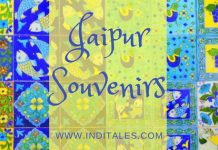 Soaking The Charms Of Airavatesvara Temple At Darasuram

Long Journey By Train In India – An Experience & Thoughts