I have lived in Karnataka for a long time. I can understand Kannada a bit, but not to the extent to be able to appreciate literature and poetry. So I had no clue about who D R Bendre is until I decided to go and explore Hubli-Dharwad. A friend told me to visit the Bendre museum. I still assumed it to be a local museum. Incidentally, the first place that I saw in Dharwad was Bendre Bhavan or Museum.

That is where numerous portraits of the poet spoke to me through his piercing eyes – eyes that had the ability to read you like a book.

A lady showed me the hall with some small to mid-sized performances and directed me to go upstairs to see the museum. This is the first time I was in a museum dedicated to a literary figure. It was full of his dramatic portraits, his photographs, and his poetry. There were life-size photographs along with his few lines of poetry – each trying to complete the other. D R Bendre who wrote under the pen name Ambikatanayadatta lives in this hall through his words, pictures, caricatures, degrees & decorations.

A poem that struck a cord said:

Roughly it would mean

Rasa is the creative juice – and in Indian Art forms, it is defined by 9 different emotions.

Looking at my interest the lady showed me a library on the mezzanine floor. I could not thank her enough, though I could only admire the books as most of them were in Kannada and Marathi. She then asked me if I would like to meet the poet’s son Vaman Bendre, who lives next door. I said, “Of course, yes”. They say in Dharwad if you throw a stone it is bound to hit a poet or a musician, so how could I not meet the great poet’s family in Dharwad?

Through the front gate, I entered a very traditional house in yellow. The poet’s granddaughter Punarvasu Bendre came out and invited me to the front room that had Bendre’s Gyanpeeth Award and a stone idol of Saraswati embedded in the wall. A small bookshelf had the family’s own collection of books. She showed me three trees in her garden. The legend is that these trees took permission to be born in this garden from Bendre, her grandfather. In one corner of the garden is a memorial with a small bust of Bendre and poems he wrote for his wife. I thought that was really sweet. Apparently, Pt. Bhimsen Joshi also lived for some time on the land on which this Bhavan stands now. I picked up a few of the poet’s books that were available in English. I hope to read them at leisure someday.

Other famous personalities and the places to visit in Hubli-Dharwad are listed below, read them and explore them.

In Search of Dr. Gangubai Hangal

The journey of An Iconic Indian Sweet – Dharwad Pedha

As I was leaving Punarvasu Ji offered me a sweet saying it is a tradition. I was touched by her simplicity and by the love of the city of Dharwad for the love it shows to its legendary sons and daughters. I wish more cities in India celebrate their own talent and preserve it so well for future generations. 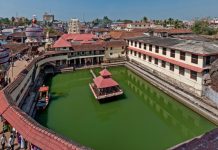