Cattle Egret in-flight can be spotted in the paddy fields, water bodies. And true to their name – near the cattle, especially the buffaloes very commonly across India. In-flight they look pretty with their pristine white wings flapping in a rhythm as their yellow beak points towards the direction of flight, sailing across short distances.

This Cattle Egret in-flight was captured over the paddy fields of Taleigao, Goa.

White colored objects photography needs good natural light. In this case, the natural light is the blessing in disguise. Contributing to get a good shot of the Cattle Egret in-flight. The bird is often seen in the company of other egrets like the little egret, intermediate-egret, great egret. And pond herons, purple herons, grey herons, White Ibis, Wooly-necked-storks etc water birds. Sharing the space in the water bodies. Particularly so during the summers as the commonly seen water bodies shrink and dry out.

Birds in my Garden at Gurgaon – Beauty of Nature.

A flock of Woolly-necked Stork – Birding in Goa. 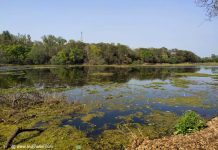 Kumbhalgarh Fort With An Unwinding Wall

The Spiritual Trail At Old Delhi – Places To Visit In...