Chausath Yogini Temples are very unique temples. Right from unusual circular shapes with Yoginis carved all around the circle to missing ceiling in these temples, they intrigue any student of temple architecture. For me, it was a long wait to visit this first Chausath Yogini temple of the 5 such temples known. 2 of them are in Odisha and 3 in MP. However, I did discover another one – dilapidated but practicing temple at Jirapur near Mandu. So, that makes the total count of such temples to 6.

As luck would have it, I visited the two temples at a gap of 20 days and what a contrast both temples are. One is located next to a huge water tank and another in the middle of rice-fields on the outskirts of Bhubaneshwar in Odisha. I walked to the temple around dusk, as the sun was setting. I knew the temple was small but it was smaller than my expectations.

Did you know Delhi was once called Yoginipura after the Yogini temples it had? Only one managed to survive – Yogmaya Temple.

Hirapur is just a few kilometers away from Bhubaneshwar but it carries no signs of having any relationship with either the city or current times. It is like a piece of past that has decided to continue living its own way, warped in its own time and space, surrounded by the rice fields.

The temple scholars put the date of this temple construction somewhere in 9th CE with a broad range of 8-10th CE. The temple has been in practice by the local villagers. It was however discovered by the Kedarnath Mahapatra of Odisha State Museum in 1953. Since then, it has been under ASI. My sense is that the temple would have always been a practice.

It is believed to be built by Queen Hiradevi of Bhauma dynasty, a dynasty that gave many queen rulers. In fact, the village that has this temple is called Hirapur after the queen. The temple is locally called Mahamaya Temple, after the central deity.

Was the queen a follower of Yogini Path or did she build the temple for the followers is difficult to guess?

Kalapahad, a converted Muslim general of 16th CE is believed to have attacked this temple as well and broken the Murtis. He is famously known as the destroyer of Puri and Konark temples.

Yoginis are goddesses or demi-goddesses who are worshiped in Tantric practices. Their temples are usually found with a group of 64 of them, but there are also mentions of groups of 42, 81 yoginis in certain temples. The yoginis are depicted in the form of chakra, and probably that is why their temples are built in a chakra or a wheel formation. Each yogini sits on a spoke of this wheel.

The list of Yoginis differs at each temple. Each one of them has a name that we identify with, but no two temples have the same list. This tells us that the local influences must have dictated the choice of yoginis for a temple. Some of them are generous and some of them are ferocious. Each of them has certain powers and you worship the one who can fulfill your wish, which could be anywhere from getting a child to destroying an enemy.

The practices are secret and revealed only those who are initiated on the path. However, at this temple, I was told that Chandi Path or Devi Mahatmay is primarily used to worship the goddesses.

Yoginis are not Sapta Matrikas, not Dash Mahavidyas, not Nav Durgas. They are a group of demi-goddesses who always live together and work together.

As I have already mentioned multiple times, it is a small circular temple. It is built in local sandstone with Murtis in black granite. The architecture of Yogini temples bear no resemblance to the other temples. They are small, contained, focused and meant for its small population of followers. So, though it is in Odisha, we can’t really call it Kalingan architecture. It is a category of its own.

In front of the temple, towards the east is a platform called Surya Pitha or the Sun platform. This was used to worship Sun by the Sadhaks or devotees. Remember, Konark Sun Temple is not too far from here and sun worship must have been a tradition here.

If we look at it from the top, the shape would look like that of a female Yoni. It can also look like a wheel with 60 spokes.

The entrance to the temple is low and narrow. You have to bend and enter. Only one person can enter comfortably at a time. Jai and Vijay are carved on the outer walls at the entrance as doorkeepers or Dwarpalas. On the sides of the narrow nape leading inside the temple are sculptures of Kaal and Vikaal. Once inside, the temple really opens up. You see the open sky above the circular not so high wall. What catches your eye though are the yoginis in black granite arranged in a neat row of temple shaped niches.

To begin with, they all look similar, but once your eyes settle down, you start noticing the difference in their postures and their mounts. Each one is standing about 2 feet tall on a different element. Many of the Murtis are broken.

The circle has 60 Yoginis, the other four were on the central square platform called Chandi Pitha. Of these 4, only 3 are there right now, and one is missing. There are 4 sculptures of 4 Bhairavas in 4 niches here. Devi temples always have the presence of Bhairava.

Internet sources say there was a Shiva image in the center but the priest did not mention it. As of now, no one sits on this Chandi Pitha. All the Pujas are done in front of Mahamaya.

Yogini No 31, as you move clockwise is Mahamaya, the presiding deity of this temple. She is well decked up with clothes, eyes, and jewelry. For the same reason, you can not see her form but you naturally bow down to take her blessings. I am told she stands on a human head.

A large Diya or lamp is burning in front of her. The priest told me that it has been burning since eternity. I wondered how it managed to stay alive during rains and during the cyclones that this region is prone to. He said, they cover it well and it stays. This fact made the Diya very special for me, and it is the eternal flame since the time the temple was built.

Each of the Yogini figures is beautifully carved with a slender body, elaborate hairdo, a pose that matches her name on top of the animal associated with her. Some of them have animal heads like Varahi or Ganeshi but they still exude the feminine charm yoginis are known for.

When I visited, a small marigold flower was lying in front of each of the yoginis. Images on the internet show them adorned with clothes too. I guess it must be done during Navaratri or during special pujas offered.

Ganeshi, a female form of Ganesha, right with an elephant head is a unique yogini here.

The outer wall is relatively simpler. It has nine niches at regular intervals with nine Devi Murtis. They are called Nav-Katyayanis or Nava-Durga. Priest related them to the nine forms of Durga that are worshipped during the Navaratri. But I could not relate the imagery to those forms of Shakti. It is possible there is another interpretation that I am not aware of.

Outer Murtis are larger in size than the inner ones. They are standing on dead bodies or dogs or jackals, the animals typically found near dead bodies. Remember some tantric practices involve the use of dead bodies, the reason you see many tantric’s at the cremation grounds. In their hands, they hold different weapons.

A small figure is seen holding a parasol on their heads.

A small Shiva temple called Sankateshwar in white color stands close to the entrance of the temple complex. A lovely little Nandi in white is wrapped in a colorful scarf.

A beautiful Murti of Krishna as Gopinath in black stands in the open under a tree. I assume it was found somewhere around and installed on the temple premises.

Outside the temple, there is a lovely Pushkarni or temple tank with a typical small temple in the middle as it is seen in tanks across Odisha. I would later learn it is called DeepDandi. The name suggests that it is used to lit up the temple. But I did not see any of them with lit up Deepas.

23-25th Dec, every year a Chausath Yogini Mahotsava is celebrated. The Odisha dance and music is performed on a stage right outside the temple. I missed it by a few days. But hopefully one of these years, I will attend it.

A big Yagna is performed on Magh Saptami. 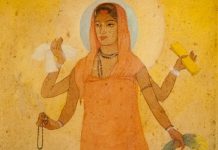