Drass War Memorial at Drass near Kargil is something that we have all heard of. We are from a generation that has lived through the Kargil War in 1999. We know the heroes of this war and we relate to them. And we have seen the visuals of the war & the war memorial on television.

It was a stop on our road trip from Jammu to Leh – located somewhere on NH 1 after you cross the mighty Zoji La Pass. I wanted to visit it – anyone who has grown up in cantonments would want to. I am not too fond of war memorials or museums that showcase war material. Having said that, nothing could have prepared me for the overwhelming emotional experience that I went through for the small time I spent there one evening.

We stopped in front of a gate that has baby pink walls surrounding it. In Gothic Font, one wall said:

Forever in Operation, All save some, some save all, gone but never forgotten.

After doing an entry into the register, we entered inside. The pathway surrounded by Indian flags leading to another tall Indian flag suddenly brought out the Indian in us. All other identities that we carry took a back seat. When I saw the tricolor fluttering, all that mattered was that we are an Indian and this is a place that celebrates India. We all clicked pictures with the flags swaying rhythmically with the gentle evening wind.

The peaks that were captured during the Kargil war, surround this war memorial. I stood in the middle of the pathway called Vijaypath and looked around. In my head, I could see bullets flying around. I am sure it was more filmi imagination and there is no way I can feel how it feels to be in the line of fire. The reality is that this place is a constant war zone. Every other day we hear of warlike exchanges in these hills. To be a common tourist here is just getting a glimpse of the environment.

Kargil Vijay Diwas is celebrated on July 26th every year.

We walked towards the Amar Jawan Jyoti – the eternal flame that is dedicated to all those soldiers who lost their lives in the war there. As we reached closer, we heard a soldier explaining the war and sharing stories of all those who lost their lives. His voice had pride – knowing well that his name could well be the next in line. After a brief story, he asked us to look left where the memorial stones commemorate each soldier who died here. Then he asked us to look right at Manoj Pandey Gallery where war remains can be seen.

A band played the music, as we started walking around. I first walked to the memorial stones called Veer Bhumi. Closer to the stones, I started reading – each stone had a name along with the rank it held and in few words told you how & when this brave soldier lost his life to keep us safe. This is when I felt the first lump in my throat. I quietly walked around and tried to read as many names as I could – as if this is my ‘Shraddhanjali’ or tribute to the soldiers. The fact is, after a while my eyes became clouded with tears and I just walked to the middle. A diorama here celebrated the victory with soldiers holding the tricolor flag of India high against a mighty hill.

A sculpture here celebrated the victory with soldiers holding the tricolor flag of India high against a mighty hill.

With a heavy heart, I came back to Amar Jyoti. Closer to the flame were words written from the Hindi Poem – Pushp Ki Abhilasha by Makhanlal Chaturvedi. I remember this poem from my primary school. Like many travel phrases that I understood during my travels, this was my moment to understand this lovely poem where a flower says it does not want to be offered in a temple or decorate a woman but it wants to lie on the path where the brave men walk to defend their country. This is where the flower would find its ideal place.

Behind the courtyard with the eternal flame is a golden wall – that again tell you the names of each of the soldiers who lost their lives here. Everyone had a heavy heart. No one spoke to anyone. Each thought was with the soldiers who died when we were probably sleeping peacefully at home or cribbing about small little problems in our lives.

After spending a few moments, I walked to the Manoj Pandey Gallery also called the Hut of Remembrance.

At the entrance, it had a bust of a soldier surrounded by Asthi Kalash or the pot their carries the ashes of the dead. This is when I broke. I cried and cried. When I looked around, I saw a tear in almost every eye. It was impossible to be not moved there.

Poem Agnipath by Harivansh Rai Bachchan with a message from his famous son was inspiring in one panel. A letter from a soldier to his son was touching in a way that can not be described.

Inside the gallery, the real photographs of war and war heroes take you through an extremely emotional journey. Towards the end of this gallery when you see a Pakistani flag captured, you understand the power of signs we live and die for.

In the rest of the premises, young soldiers when around doing their duties. They were gardening, tending to lawns and watering the tender flowers. I wanted to hug each one of them and bless them. I did go to a few of them and thanked them. They were humble as always and returned my thanks with thanks. I realized they were all very young men. One of them replied with immense maturity – M’am I am just doing my work like you do your work. I wish an ounce of this humility could be transferred to urban youth who only know how to ask for their rights and for whom responsibility is a meaningless word.

I saw the souvenir shop and coffee shop – both the places were a perfect coming together of tourism needs and army culture.

There are guns and choppers on display – including the famous Bofors Gun, but I skipped them. These are the things humanity can easily live without.

Soldiers message for the Countrymen

As you exit, you find these words facing you.

I have been to all kinds of places, even Schindler’s Museum, but have never come out so emotional. I felt proud, humbled, thankful and grateful – all at the same time. While driving to the town, I wondered if military service should be mandatory for all citizens? Would it shape us as Indians? Would it bind us in a national identity that sometimes takes a backseat in favor of regional identities? I do not have the answer, but a visit to Drass War Memorial will definitely leave you with these thoughts. 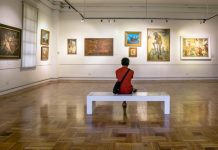 Orchha – Living Fort City You Must Visit In Madhya Pradesh