A few days back I was roaming around the Charminar area of Hyderabad looking at pearl shops and pearl workshops along with a friend who knows the area very well. She showed me this Lion, apparently made of clay and commonly known as Mitti ka Sher. This statue of a Lion lends names to the lanes around it. You can read the postal address as Mitti Ka Sher, Charminar. This reminded me of an old e-mail that another friend Sriram had sent me about the Etymology Of Hyderabad. How many areas of Hyderabad were named?

Raza Ali Khan was the Dewan of Nizam’s State in 1670 AD. His Title was ‘Nekh Nam Khan’ A jagir was granted to him, which came to be called Nekh-Nampally. This became ‘Nampally’.

Basheerunnissa Begum, daughter of Nizam II was married to a Paigah noble. She received lands in dowry. The village came to be known as Begumpet.

The jagir granted to Khairunnisa Begum daughter of Ibrahim Qutub Shah came to be known as Khairatabad.

The land was gifted by Humda Begum (the wife of Nizam Ali Khan Nizamul Mulk) to the merchants of Hyderabad for trade and commerce. Finally developed as Begum Bazar.

After 1933, the Residency Bazar was renamed the Sultan Bazar. That is when these areas were returned to the Nizam, by the British (Residency).

The V Nizam (Afzalud Dawlah) gifted land to the grain merchants for trade and commerce. The place was named Afzal Gunj.

Named after Sikander Jha (1806) (III Nizam). This was the village where the British troops were stationed.

Named after a person, who was always angry-faced and talked ill of others. This lane is in the old city.

The new locality is named after Hyder Ali. He was the 1st Talukdar (District Collector). And owned lands in the village formerly the Jagir of Vaheed Unnisa Begum, wife of the then Nizam. The locality is called after him, Hyderguda.

The garden of Sir Asman Jha, Basirud-Dulah – a Paigah Noble. He had a palace in the garden.

A revenue department employee named Sonaji. He owned lands and resided in this village. Sonaji became Somaji. And the hamlet came to be called ‘Somajiguda’. (Guda is from Godem a hamlet).

Named after Malik Yakoob. A servant of Abdulah Qutub Shah the Golconda King. Where the King resided, he had a market, hence the name Malakpet.

A Jagir village of Sayed Meer Momin, Dewan of Golconda (during 1591).

A valet and steward of Nizam (VI) Mahboob Ali Khan. This man had his first shop here.

Named after Sarwari Afzal Bai, the mistress of Arasthu Jha. He was the Dewan of Hyderabad, who granted a Jagir and constructed a palace and garden for her.

The village is named after Abdul Samad with the title; Dabir-ul-Mulk. He was a nobleman.

A market developed by Noor Khan. He came from Lucknow, during the time of the Nizam II of Hyderabad.

A locality to the west of Lakdi-ka-pul. The barracks of Abyssinian Cavalry Guards of Raja of Wanaparthy (during 1910). Abyssinia is the old name of Ethiopia, an East African country.

From my walks, this is an addition to the list.

On top of Panjagutta Pahad or hill is a stone slab with the marks of a Panja (Palm) and Ghutna (Knee). And that gives the place its name Panjagutta.

If you know of more stories behind the names of localities of Hyderabad and Secunderabad, do share them. I will update this list of the Etymology of Hyderabad. 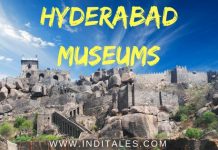 Mannar And Its Thiruketheeswaram Temple In Sri Lanka

Rendezvous With Indore, Omkareshwar And Ujjain