Two years back, I really enjoyed spending half a day there. Kashmir was the theme state. There was a proper arrangement to showcase the culture of Kashmir, its folk dances, and Ghazal singing talent. There were stalls by most of the state tourism departments. The officers at the stalls were doing their best to promote their state as a tourist destination. In fact, this was the first time I saw government officers actually showing a very corporate like behavior. I had a chance to speak at length to one of the ITDC directors. And he shared a lot of ideas for potential entrepreneurs in travel space.

This year the fair is at a much smaller scale, crowded by the resorts and tour operators from Kerala. There were very few states participating. Gujarat being the theme state, had its folk dancers presenting the folk art, but in a very limited space, almost limiting their movements. The state tourism departments were missing. Those that were present also were represented only by their recently joined local staff, who could do little more than providing you the printed material. ITDC was conspicuously missing. KSTDC was also present only as a tour operating company.

The changes in the presentation of stalls were worth noting though at IITM Bangalore. Karnataka, Andhra, and Gujarat had magnificent stalls, with make, believe replicas of their famous monuments and the representative architecture. The colors were almost true to life. There was a wide usage of technology to showcase the destinations, LCD screens were just ubiquitous. There were online portals promoting themselves for partnerships. And willing to sell anything that you may have to offer in the travel and tourism space. The displays were showcasing local grandeur in an absolutely global fashion. There were a few countries, exotic ones like Egypt and Greece and the regular ones like Thailand, Malaysia et al, but nothing particularly new about them, except that you realize that you are the world market today and everyone is looking at your credit card for business.

There were a few countries, exotic ones like Egypt and Greece. And the regular ones like Thailand, Malaysia et al, but nothing particularly new about them. Except that, you realize that you are the world market today. And everyone is looking at your credit card for business.

Times are getting interesting for us…. 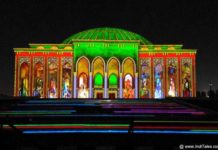