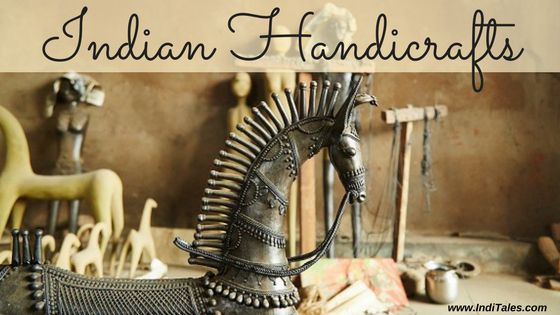 If the Indian map were depicted by its handicraft clusters, it would be a vibrant diamond, housing pockets of handicrafts along its length and breadth. The Indian handicraft map would feature deep zaffre Jaipur pottery in Rajasthan, burnished Bastar metal art in Chhatisgarh and russet wooden toys in Sawantwadi, Maharashtra. Tinkling Kutch metal bells would form the rivers of Gujarat and ivory marble would sit atop mountains in Uttar Pradesh.

Kathputli or Wooden Puppets from Rajasthan

As you traverse the craft-flecked landscape that covers the country, you’ll witness a grand spectacle of vivid color and magnificent designs. Rajasthan, for instance, has harbored and nurtured centuries-old crafts within its folds. Kathputli is one such craft. Originating from the words kath, meaning ‘wood’ and putli, meaning ‘lifeless doll’. Kathputli is the art of storytelling with handmade puppets.

Kathputli art was started by the Putli Bhat community more than a thousand years ago. It has been used in Rajasthani ballads, folk dances, and village fairs. It has given India prominence by virtue of it being one of the oldest puppetry forms in the world.

Forty years ago, as the craft spread its munificence northward, a slum commune was erected in the deep, dark bowels of Shadipur Depot, Delhi. Aptly named ‘Kathputli Colony’. Here street performers, magicians, folk dancers, and singers gathered to entertain audiences. For the length of those performances, these entertainers would forget about their hardships and living conditions. Instead, they would slip into the happy world of Kathputli where they could be whoever they wanted.

In 2010, the government of Delhi declared that it would help to improve the facilities and infrastructure in Kathputli Colony; the project is underway. Today, there are various organizations, like Rupayan Sansthan and Bharatiya Lok Kala Mandal, working to protect and promote the beautiful craft of Kathputli. Bharatiya Lok Kala Mandal has even dedicated a museum to the craft, which you should definitely consider visiting the next time you are in Udaipur!

Rajasthan is also known for the exquisite craft of Meenakari, an ancient form of metal ornamentation. Colored minerals in an array of dazzling shades are fused to metals carved in intricate designs. Originally, it is a technique devised by the Iranians. Indian craftsmen acquired the skill from the Mongols who spread the craft to the Indian subcontinent. It is also known as enamel work.

Meenakari is derived from the Persian word Mina, meaning Azure. Its products include lampshades, jars, mats, tiles and flower pots. However, it remains most popular in jewelry. Red and Green are the more popular colors of Minakari in India. However, in Varanasi Mina Work is done in Pink color as well.

Jaipur Miniatures also hail from the same region. Diminutive paintings with fine detailing, this timeless art style dates back to the tenth century. The earliest forms of miniature paintings were found as illustrations in the Buddhist text Prajnaparamita. Through the reign of the Chalukyas that lasted until the thirteenth century, artists captured Hindu and Jain manuscripts through miniatures. During the Mughal rule, these paintings became a synthesis of the Indian and Persian styles.

Best Place to see a vast array of Indian Miniatures is – National Museum at New Delhi.

If we had to color Jaipur on the map, it would be an iridescent blue, for its brilliant Blue Pottery, a traditional glazing style that uses bright blue dyes to adorn pottery. Contrary to popular opinion, Blue Pottery did not originate in Jaipur. In fact, it did not even originate in India. It was invented by Mongol artisans, whose techniques traveled to India in the fourteenth century, only to be further developed by the Mughals.

Another town famous for ceramics and pottery – Khurja in Western UP.

Dokra or Bastar Art from Bastar

There is no doubt that the Indian craft map would sparkle especially brightly around Chhatisgarh. After all, it is home to the Bastar metal art form, a style that transforms hot molten iron into radiant shapes, using a process called lost wax casting. After meticulously creating molds with clay and beeswax, hot liquid metal is poured in. This after cooling, takes the shape of its clay shell. Bastar gets its name from the Bastar district. This art form is found across tribal regions of India like Bengal, Andhra, Telangana and of course Chhattisgarh.

When we travel toward what was once known as the “Jewel of Western India” or Gujarat, you are surrounded by crafts that have carried on a rich heritage for several generations and in some cases for over a thousand years! The magic of Kutch in Gujarat is something that cannot be explained, for art and craft lovers it is nothing short of experiencing the “kid in a candy store” feeling. Two of the most interesting stories we came across are the crafts of Kutch Metal Bells and Ajrakh printing.

The Kutch Metal Bells is an Indian handicraft that goes back over a thousand years. The bells were traditionally used by farmers for their cattle. An interesting thing here is each farmer could identify his or her cattle with the sound of the bell as each bell had a distinct sound so no two farmers would have the same bell – it was almost like a modern day GPS!

The making of Kutch Metal Bells requires a balance of hard labor and precision at the same time. A sheet of scrap metal is cut by the artisan and then bent into shape using a hammer, the artisan hammers away till the desired shape is achieved. A dome is then (which is also entirely made by hand) attached to the bent scrap metal sheet giving it the shape of a bell. The bell is then coated with copper powder and is pasted together with mud before being heated in a brick furnace. Once out of the furnace (and not hot!) a wooden piece is attached to the center of the bell that gives it a very distinctive and melodious sound.

Just a few kilometers from where Kutch Metal Bells are made lies Ajrakhpur. Home to some of the finest and oldest textile printing in the world – Ajrakh. An interesting story surrounds the origin of the name of this particular craft. The story goes that once there was a king who needed a new bedsheet

The story goes that once there was a king who needed a new bedsheet every day and would never repeat them once used. A printer sent the king a bedsheet using the traditional craft of hand block printing. The next day the king’s staff was to remove the bedsheet as per routine, however, the king was so impressed by the bedsheet that he ordered his staff to keep it for one more day or ‘aaj rakh’ – giving the craft its name. Ajrakh hand block prints are world renowned today. The work of some of the artisans we work with is also featured at the V&W Museum in London.

One art form that has gained visibility over the years is Warli. There is evidence that the Warli tribe, which resides on the coastal belt straddling Maharashtra and Gujarat, began practicing this art around 3000 BCE.

This earthy, folksy art form uses triangles, squares and circles to create elaborate drawings, with each shape exuding an organic symbolism. The tribe believes that the triangle is used to represent mountains and treetops, the circle stands for the planets in the sky and the square speaks of human contributions to the universe.

Warli has been protected under Geographical Indication, a measure used to assign a technique to a particular region. Warli is being resolutely promoted by the ‘Adivasi Yuva Seva Sangh’, in an effort to protect the intellectual property rights of the Warli tribe. At India Kala, we work with over 30 artisans with expertise in Warli art. Efforts are being made to promote the art form both domestically and internationally.

If you journey a little higher up the country, you’ll reach Uttar Pradesh. Which is home to several clusters that produce captivating products of Tarkashi, created by skilled artisans? The word Tarkashi, implies the careful inlay of brass, copper or silver wire in wood, forming a soft filigree. The core word is taar or wire. The districts of Saharanpur, Nagina, Bijnor, and Mainpuri form the cornerstone of

The districts of Saharanpur, Nagina, Bijnor, and Mainpuri form the cornerstone of Tarkashi in the country. The artisans there will tell you that this Indian handicraft originated in the late nineteenth century. As a tool to carve khadauns or wooden footwear, for pious Hindu priests who considered leather unholy. Now, however, Tarkashi techniques are used to create home décor items like table tops, trays, and coasters.

As you near the end of your journey, folding your map and tucking it away into your memories, you’ll realize that you’ve covered a very small part of the Indian handicraft landscape. As global acclimatization leads some to believe that handicrafts are a lost art. There are still others who continue to back these promising cottage industries. India Kala endeavors to spread traditional art forms by connecting artisans to the larger community. The same crafts that have formed the landscape of India’s handcrafted heritage are relentlessly reinventing themselves to fit into modern homes. It is time, we embraced them. Let’s invite them in; let’s bring a little more India, home.

This is a guest post by Jaimini Purohit of IndiaKala.com – a portal that brings Indian Handicrafts to a screen near you. All Images unless with IndiTales watermark are from India Kala.

Variety Of Mouth Watering Must Try Food At Varanasi