We visited Manikaran Sahib on the last day of our 18th day of the long Himachal Odyssey. It was like saying Thank you before we head home. We started from Manali in the morning after breakfast and reached the holy Gurudwara well before lunchtime. We, of course, knew about the hot springs there and the hippie village of Kasol on the way. But then every day that you spend traveling, you get to see things that you never expected.

On the way, we drove along the Parvati River. Parvati river that gives the name to Parvati Valley is like a young girl and the perfect word to describe her would be ‘Alhad’. She is impatient, in a hurry and full of energy. Cutting through the mighty Himalayan mountains, she makes her way. She is unstoppable. A look at her and you know you can not hold her, control her and bind her abundant energy. You can only sit back and admire and you can only wish well for her.

On the other side are these rocky mountains. The road is like the central lever of a balance. That balances the steady strength of mountains with the flowing strength of Parvati River’s waters.

We crossed a bridge built on Parvati River to reach the Gurudwara. It was when I stood on this river that I realized the strength of water with all its force. There was so much force in the water that nothing could have stood in its way. Even my thoughts seem to have stopped. All I could hear was the roar of the river beneath that metal bridge.

This Gurudwara celebrates the visit of Guru Nanak Dev at Manikaran in the late 16th CE. Legend is that when Guru Nanak Dev Ji visited the place and asked for Langar from the village. They received all the raw material but there was no fire to cook. Guru Nanak Dev Ji told his disciples to lift a stone. To everyone’s surprise, there was boiling hot water under the stone – good enough to cook food in it. However, the food kept getting drowned in the hot water pond and the disciples looked at the Guru. Guru taught them a lesson in gratitude when he asked them to offer the food to God if you want to have it. And yes, as soon as it was pledged to be offered to God, food started floating.

Today, there stands a Gurudwara at the very spot. It is on every Sikh devotee’s wishlist to visit Gurudwara Manikaran Sahib at least once in a lifetime. We spent some time at the Gurudwara where the Gurbani path was being recited. After ages, I ate the Kadha prasad – that is not just the tastiest of the foods. But also holds many childhood memories of growing around Gurudwaras in Punjab. We said our prayers and set out to explore the hot springs behind the shrine.

We walked through a long tunnel-like corridor to a room called ‘Garam Kothi’. The stones below our feet were hot. In the room, it was impossible to stand, the heat was too much to bear. We saw many old people sitting on the stone. When we asked them why are they sitting there, we were surprised by the answer? They said the heat here can cure you of many diseases, especially joint pains and related problems. It would take a lot of willpower to sit in that heat. I guess it would be worth it if you can cure yourself without any pills. We got out and passed through a bustling bazaar – which is a hallmark of any pilgrim place in India.

We were led to the courtyard of a Shiva Temple where we could see many a well like openings with boiling water. With River Parvati flowing in the backdrop, it was impossible to believe that the two water’s next to each other is more or less about 100 degrees centigrade apart in temperature. The water of Parvati was ice cold and right next to it the hot water springs had boiling hot water. The water was so hot that there were wooden planks kept for people to move around.

You can boil your own grains in a cotton bag in about 30 mins. One can see many such bags hanging around. You would also see big utensils placed there – this is the cooking at the Langar. As you see the temple through the steam emanating from hot water springs, you wonder if we would ever be able to understand the mysteries of this world. Were these mysteries left around us to remind us of how less we know about nature and how much more is still left to be understood?

The legend goes back to the days when Lord Shiva lived here for 1100 years with his consort Parvati. During a playful moment in a pond, Parvati lost a gem or ‘Mani’ from her earring that landed with the Sheshnag – on whose hood we believe the earth is balanced. Parvati urged Shiva to find her gem and when he could not find, he opened his third eye and Naina Devi was born. She became his eyes and went looking for the Mani. Sheshnag then spits out a lot of Manis or jewels and asked Parvati to pick the one that is hers. She picked hers and cursed the others to become stones. It is said with the spitting of Shesh came these hot springs. People even say that Manis came out this spring until the place was hit by an earthquake in 1905.

You take your call on how to interpret this story. To take it as history or mythology or our ancestor’s way of passing us some coded story.

After soaking in the steam from hot springs I visited the Shiva temple behind it. As of today, it is a simple Shiva Temple that I assume has been built not too many years ago.

Watch the video clip of our visit to the Hot Springs at the holy place.

As I walked back to the car, the mystery of hot springs, the heat of Garam Kothi and the roar of River Parvati below the bridge walked back with me.

Recommend you to read more about Places to visit in Himachal Pradesh on my Travel Blog.

Drive to resolve the curiosity of Giu Mummy 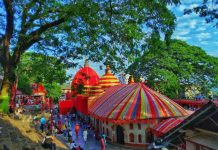 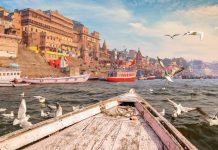 Mystical Ghats Of Varanasi You Must See

Ancient Shakti Or Devi Temples In Haridwar To Visit

Foodies Here Are The Must Relish Top 50 Dishes To Try...