Chidambaram to most North Indians is just the name of a famous politician. And maybe it is the name of the village he comes from. It is only when you come down south or when you study temples in South India that you know that Chidambaram is home to the famous Nataraja Temple also called Chidambaram Temple. Before the temple came this was a huge forest where Shiva is supposed to have performed Anand Tandava. Hence Shiva is known and worshiped here in the same form. Located about 240 odd KM’s south of Chennai and 60 km’s south of Pondicherry this town boasts of many other temples.

Various dynasties of the South Indian rulers have contributed to the expansion and maintenance of this temple during their respective periods. You can find imprints of them in various parts of the temple.

Four huge Gopurams flank the four cardinal directions of temples. Gopurams in this temple are far higher than the temple itself. Which is of modest height but is compensated by the fact that the roof is pure gold. The main entrance is from the East gopuram through a narrow street. That has vendors selling pooja items and stands to hold your footwear. The gopuram is not painted till the gateway. The superstructure is painted in multi-color with blue forming a background and various Gods and Goddesses depicted with their identifiable features. The inner walls of this Gopuram have all the Bharatnatyam poses carved in small square stone tiles. On the front and back of the gopuram, there are small statues. Some of which are locked and I could not get an answer to why that has been done.

Some idols are clothed and decorated with flowers and it appears they are worshiped while others are probably just admired. I think Mahishasuramardini figures, of the Goddess, killing the demon Mahishasur, were the ones that seem to be worshiped wherever they appear in the sculptures. There is a curious sculpture of a bearded smiling man with folded hands. My best guess is that it depicts one of the kings who patronized this temple at some point in time. His consort seems to be in the smaller niche by his side. Other Gopurams are also similar to an untrained eye, though the dance poses are not there. There are some big and small temples in the courtyard belonging to various deities.

Inside the temple are huge corridors supported by huge rectangular pillars with a protruding top creating a canopy over the corridors. Pillars are mostly plain but the top parts are carved. Walking through these corridors can make you feel majestic. As the inner part of the temple is kind of cut from the outside, it transports you to a different world and probably a different time. There were not too many people at the time I was there. But whoever was there wore traditional clothes and in their devotional state, adding to the ambiance. There are Pandits with their half-shaved heads and rest of their hair in a knot and various dots and lines as stamps of their jobs.

They keep an eye on the visitors and try to engage them for Poojas and suddenly lose interest in them when they say no. The main temple that houses the Nataraja is approached from the side rather than the front. You can hardly see the idol or statue as it is covered in so many layers of clothes and flowers. All you get to spend there is a couple of minutes. Interior of this temple is huge and you can spend quite some time walking around it. There are smaller shrines on one side. At places, you can see ceiling paintings in bright blue and golden yellow. The main shrine has a curvilinear roof in gold and doors in silver.

I was pleasantly surprised to a sleeping Vishnu and Lakshmi at the Shiva temple when Shaivites – Vaishnavites disputes are so well known in this region. But as I tweeted, there could not be a better example of inclusivity in religion. At the back is a fairly large Shivangi Amma’s temple that has colorful floors. There is another big temple in another corner with elephant sculptures but it kind of looks abandoned. A decent-sized Pushkarni or water tank exists on the side of the temple along the northern Gopuram, that with its reflection in water looks beautiful. A pillared corridor goes along the Pushkarni but it was filthy. You would think many times before putting your foot there.

Upkeep of the premises

Rusting on the walls probably shows the iron content in the stone. Is that why the gopurams are painted to keep them free of rust and the region is humid most of the times. Electrical fittings in the temple definitely need some design inputs. As of now, they seem to have been put as if they are there to deflect the evil eye. There are some hints of paintings here and there. I wonder if any effort was ever done to preserve them. You seriously wish that this kind of heritage and this kind of devotional place is kept clean in the first place. But that does not seem to bother the devotees or the authorities.

You can easily spend half a day in this temple itself, admiring its sculptures, its architecture and observing the living traditions of this place. There is a lot to see in Chidambaram beyond this iconic temple.

Recommend you to read the following Places to visit in Tamil Nadu.

Soaking the Charms of Airavatesvara Temple at Darasuram

Chidambaram beyond its Iconic Temple 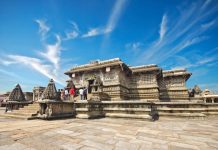 Tata Vista D90 – A Review Of The Tata Motors Car

Wadi Rum – Wanderings In The Magnificent Landscape Of Arabian Desert

Faizabad, Legacy Of Nawabs Of Awadh – Twin City Of Ayodhya