On the Pest side of the city of Budapest, on the corner of the Boscolo Hotel, opening into the side street is this opulent coffee shop on many floors called New York Cafe that is definitely not 21stCE.

I soon discovered that this is not just a coffee shop as you see it today. But a piece of history that heritage that is being maintained as such by its current owners. This café was always meant to be opulent. “The most beautiful coffee shop in the world” was the vision with which this coffee shop was built way back in 1894. It was a part of the New York Palace commissioned by the New York Insurance companies. And this may be the only reason I like an Insurance company.

Most Beautiful Coffee Shop in the World

The ceilings of the cafe have panel paintings by Gusztav Mannheimer and Ferenc Eisenhut.  Twisted pillars, Golden Stucco work, and Venetian chandeliers contribute to one of the most refined opulent environments. The tabletops on the café tables are mirrors that reflect these paintings. And other arts work in a way that they never let your eyes be away from grandeur. Even when you look at the table to eat.

This cafe was also the hub of literati of central Europe region before the First World War. This is where some famous directors sat and worked on their film ideas. Once upon a time it also served as the office of the literary periodical Nyugat. It was also a music café; gypsy music and brass music could be heard there. Personal waiters who intimately knew the tastes of their regular guests took care of them. Legend is that it was loved so much by the authors that one of them threw its keys in the Danube so that it could not be closed.

After the First World War, this was opened as a restaurant by the name ‘Deepwater’ for a while before it was closed in the 1930s. It remained a warehouse for the next 24 years before it was re-opened under the name Hungaria in 1954. In 2001, the Italian Boscolo group took over and restored to its original glory. Making it one of the must-visit places in the city of Budapest, Once Again!

As I was staying in the Boscolo hotel, I got to spend two mornings in this Cafe enjoying breakfast here. I highly recommend this cafe if you are in Budapest.

Recommend you to read the following travel blog posts on tourist attractions of Budapest, Hungary. 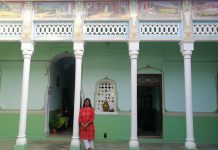