Himachal Pradesh has a lot to offer to travelers. It is one of the tourist-friendly states in India. Known as Devbhoomi or The Land of Gods, it is famous for its temples and shrines. The state is blessed with the Dhuladhar Mountain Range and the Himalayan Mountain Range that play host for travelers seeking a different type of adventure. While Himachal Pradesh is famous for its adventure treks and bike rides, it is also a renowned place for Paragliding experience. Bir Billing is one of the popular paragliding sites in the world. It is the second-highest paragliding site in the world.

I was planning a trip to the place for a long time. Due to some reason or the other, I had to postpone it several times. Eventually, the long weekend of 26th January this year, I and my friends finally undertook a four days trip.

In this post sharing my trip experience and what to do once you are there. And some vital information that might help travelers in planning a good trip.

Why is Bir Billing famous?

Paragliding is one of the most popular forms of adventure sport. There are thousands of sites in India and around the world, famous for the adventure activity. Yet Bir Billing stands out among them because of the height and duration of the flight one can experience. The paragliding takeoff point at Bir Billing is about 3200 meters above the sea level, which is quite high compared with other sites. Secondly, the average flight time at Bir-Billing is about 20-25 minutes, which is again above the average standards offered by other sites. I have done paragliding at Bhimtaal in Uttrakhand. I can say that there is no match for paragliding in Bir Billing when compared to the rest of India.

Where is Bir Billing?

Bir is a village located in Baijnath town in Kangra district, one of the famous hill stations of Himachal Pradesh. The place is about 530 kilometers from the national capital Delhi. The paragliding site here is divided into two parts – Bir the landing site and Billing the takeoff point.

My trip comprised the first-day stay at Barot Valley and second-day at Bir.

We started the road trip early in the morning from Delhi to avoid city traffic. It reminded me of my bike trip to Sach Pass when I started early for one of the toughest roads in India. It took us approximately fourteen hours to reach Barot from Delhi. On the way, we took a break at Ambala for breakfast, crossed the town of Una on Punjab-Himachal Pradesh border, and enjoyed lunch at Kangra.

The journey, particularly from Kangra to Bir, is mesmerizing with snow-capped Dhuladhar range surrounding the valley. Bir is close to the Buddhist town of Dharamshala, we noticed many Buddhist Monks en route our journey. Finally, we reached Barot Valley after crossing Palampur, a city made famous by the film Raja Hindustani and the pilgrim town of Baijnath. Since we were exhausted by the day-long journey, we decided to take rest and explore the valley the next day.

The morning at Barot Valley was different from my typical day. A chilling morning welcomed us, and it took a lot of courage to leave our bed. Remember, 26th January weekend is the peak winter season in North India. The previous day, we drove for almost an hour in the dark and missed the landscape of the valley.  It was more than compensated when we got the full view of the valley in the morning.

I was awestruck by the landscape view. It looked like the entire valley is under the cover of a white blanket. The mercury was hitting as low as 2-3 deg centigrade forcing us to skip our bath.

The Uhl River flows through the Barot valley and serves as the lifeline for thousands of locals living there. After a light breakfast, we headed for a walk to the Polling village, followed by a small trek. Polling village lies 9 kilometers from Barot and was 5 kilometers from our hotel. The recent snowfall had closed the main road connecting Polling to Barot. We had to ditch our car and use a local Gypsy. We started around 11 AM, after a short drive of 30 minutes, reached the Lohardi village.

From Lohardi, we covered the rest of the distance by walking. Although we had a local guide, the Uhl river was the best guide, guiding the route we had to follow. The thickness of snow kept on increasing as we advanced towards the Polling village. By the time we reached Lambadug Hydro Electric Project, the snow cover was more than a foot on the main road and a few more feet on the sideways. We crossed the Uhl river via a suspension bridge and continued our walk towards the village.

After the bridge, the walk became a hike, slowing us down. There was an alternate road connecting the village, but the route was engulfed by snow. We decided to use the alternate track created by the villagers to reach the village. At Polling, we took a lunch break before continuing our journey to the nearest peak. During the peak winters, the villages in such high altitudes have limited resources, and it reflected on the menu too. The only option was Rajmah-Rice, and we happily settled for it. After lunch, we continued our trek and in 45 minutes, we were at the peak.

Soon, it started snowing. For most of my friends, it was their first encounter with a snowfall. The 360-degree view of the area gave goosebumps to all of us. The houses in the Polling village looked diminutive. We couldn’t believe that we climbed such an altitude over a short span. We enjoyed the view for about an hour and tried our hands at some creative photography. It started getting dark, snowfall was making it colder, and it was time to head back.

Back at Polling Village, we could not walk further due to cold and wet shoes. We arranged the Gypsy to take us back from the suspension bridge. We headed to our guest house with the beautiful memories of the trek and rather painful experience of the return journey.

The next day was special – we were going for the adventure. From Barot, via Jogindernagar town we reached the Bir village. The 50-kilometer drive from Barot to Bir is a mesmerizing drive, passing through small and beautiful Himalayan villages. At Bir, I was astonished by the town, it nowhere resembled a village. The entire population here thrives on tourism and particularly on paragliding. It is full of homestays, hotels, and restaurants that cater to the needs of travelers. A lot of people work as drivers, guides, potters, and instructors.

We checked for our slots with our manager. There was a wait time of two hours. So we decided to go for lunch and try our hands at photography to get some good shots. As our turn for the adventure approached, we boarded shared sumo and headed to the nearest hilltop venue.

Billing lies 20 kilometers from the landing site at Bir, and it took us approximately two hours to reach there. Although it was winters, a tourist offseason, I was surprised by the sheer number of tourists. We filled the declaration forms and wore the protective gear.

It is a simple task. You must run as fast as you can and then jump from the hill. When you run, the glider flaps accumulate the necessary air to keep you flying. One glider can accommodate two people. The tourist occupies the front saddle seat, while the guide positioned behind, maneuvers the glider using strings attached to all the flaps. 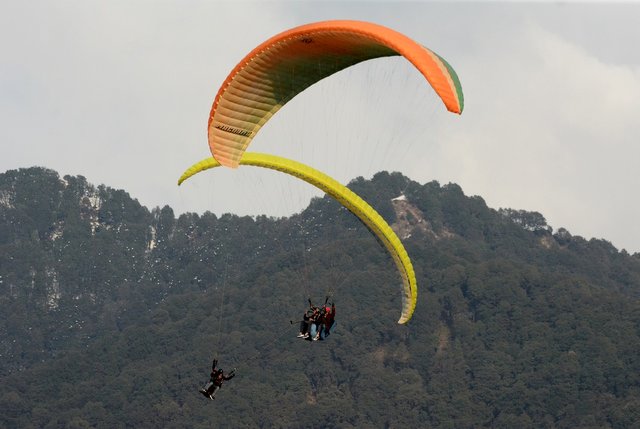 Once we jumped from the hill, it took us about a couple of minutes to adjust and understand the pattern of the wind. Once accustomed and comfortable I started the conversation with my guide and informed him about my previous experience of the adventure. He promised to do a swirl landing at the end of our flying.

My GoPro started recording the bird’s eye view of the valley and Dhuladhar Range. The chilling wind made the flight miserable. I could not hold the camera as it was too cold to expose bare hands. I cursed myself for not carrying gloves. Despite all the pain and suffering, I enjoyed every moment of the flight. The hills and villages looked tiny. It was fun to see other gliders filling the sky. You realize probably the birds are the luckiest creatures. My flight continued for another eighteen minutes.

Once we approached the landing, my guide showed me how to do a swirl. During a swirl, the glider rotates at a fast speed in a smaller circle compared to a routine flight. I was amazed by the experience. After landing, I thanked him for the flight and a fantastic experience. Once all of us completed our flight, we paid the fees, which was 2000 rupees per person and 500 rupees for the camera. As I was carrying my own GroPro, I had to pay only 2000 rupees.

It was a lifetime experience if I compare it to my earlier experience at Bhimtal.

As soon as we landed in Bir, the weather started deteriorating. Organizers had to cancel the last 20 flights due to the bad weather. I thanked God for a successful flight and for allowing us to complete a hassle-free trip. Had we delayed our flight by 20 minutes more, maybe it would have been canceled. By 4:00 PM, done with the adventure, we had enough time to plan our return journey. We decided to start driving back to Delhi and try to cross the mountainous roads as much as possible. Driving in planes is not difficult, it is the steep curves that need special attention. 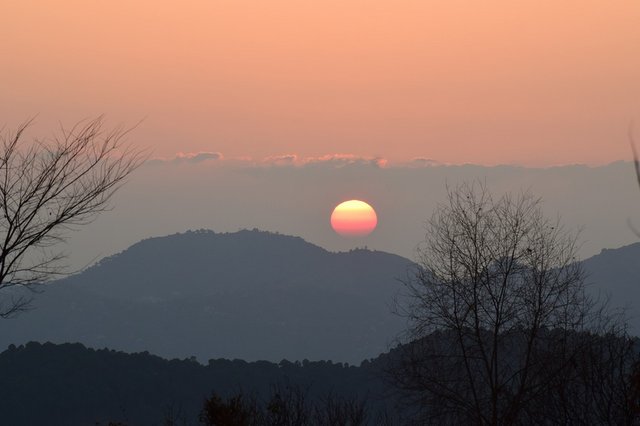 Shushant is a history & geography Lover and part-time travel enthusiast. He is an IT professional by job and in free time loves to explore India on a motorcycle or watch documentaries. He manages his blog Knowledge of India when he gets free time.

TJs A Brand From The Tihar Jail, Delhi – You Must...

Day 1 At The Bangalore International Airport