Patiala Heritage walk was on my wishlist for a long time – since I saw it on a Punjab Tourism brochure. I have memories of Patiala from my childhood when I used to visit this city. I knew it is famous for its bazaars where everyone went shopping. And I knew it for the Soot ka Laddus. So, this time on a trip to Delhi, I decided to explore the place in detail.

Come with me for a Patiala Heritage Walk, to begin with.

A falling plaque in marble reads – Samadhi of His Highness the deceased Maharaja Alla Singh Sahib Bahadur who died in Samvat 1822.

The main building carries a very medieval Indian architecture. It has a main room, in the center of which lies the memorial to Baba Ala Singh. A conical pile of clothes commemorates him. There is a portrait of him on the wall and another small photograph resting on the pile of clothes.

An arched corridor runs around the room. Small canopies stand at the corner of the platform that has this structure.

Behind the main building are cenotaphs of the later members of the family. The cenotaphs of Karan Singh & Narinder Singh carry plaques, all others are anonymous. Rajmata who recently died was also cremated here.

The best part of Shahi Samadhan is an open pavilion in white marble on top. I wonder what was the purpose of this pavilion. Being right on top of the Mausoleum, no one would really sit here. Was it just an architectural element or there was a purpose to it in the war-ridden Punjab of those times.

Who Was Baba Ala Singh?

Baba Ala Singh was born to Ram Singh in 1691. He started fighting small battles giving protection to people of the Phulkian area that would include the districts of Patiala, Nabha, and Jind today. He established Kachha Patiala in 1745. A fort was built around the place where he used to sit. This is a huge fort, now at the heart of the city of Patiala called Qila Mubarak. Baba Ala Singh’s Gaddi became famous and a dynasty was found.

Do you know Patiala comes from Patti of Ala i.e the land of Ala Singh?

A famous anecdote of Baba Ala Singh says that he was ordered by Ahmed Shah to cut his hair. He said you can cut my head but not my hair – the sign of being a Sikh. Finally, on payment of Rs 125,000, Ahmed Shah took back the order for cutting Baba Ala Singh’s hair. Some ways to extract money!

After spending some time at Shahi Samadhan, we stepped out a little more equipped with the history of Patiala.

Pammi Poorian Wala is the second stop on Patiala Heritage Walk. This a 30 to the 40-year-old shop selling piping hot Pooris and Chhole Bhature with pumpkin or Kaddu ki Sabzi. We had our breakfast before the walk but could not resist tasting the Pooris. They were nice but I was more tempted by the Soot Ka Laddu.

It is fun to see the food being cooked right next to you and Pooris landing on your plate right out of the pan.

Pro Tip – Do not eat breakfast before you embark on the heritage walk. Instead, have it on the way – the Patiala Way.

As we entered the narrow lanes with tall Havelis on both sides, I was reminded of Bikaneri Havelis. The Havelis here are not that grand but the doors are as rich. Almost every Haveli door is carved in wood with intricate designs on them. The door jambs too were made in broad frames and lovely to look at. Invariably, there was a Ganesh carved on top of the door.

Some windows and window frames were nice but you have to really stretch your neck to look at them. Blue Grey color for doors seems to be the favorite in the town.

Wires hang in the narrow lanes. Two-wheelers and pedestrians compete for space as they try to move in these gullies.

There are small temples – a part of the Mohalla. I visited the Shiv temple, which is as small as it can be but still has a Shivalinga that you can see from the road itself without taking off your shoes. There is a small parikrama path or circumambulation path that goes around Shivalinga. Other temples were closed when I visited.

Haveliwala Mohalla is home to the prestigious people of and from the town. Many families working for the Maharajas lived here. Many politicians hailing from Patiala have their ancestral homes here. I could see a lot of houses belonging to Jain families.

This is an arch-shaped open structure named after the erstwhile Diwan of Patiala, who used to hear public grievances here.

At the moment it looks as if it is just a passageway. But, you never know how many stories are hidden behind it.

As you come out of Chhata Nanumal, you would see the shining steel and Brass utensils all around you. This is the Bartan Bazaar or Utensils market. In a corner a dyer was dyeing the Pagris, in another, a Kalaiwala or the polisher was polishing the brass utensils. Here and there the colorful phulkari dupattas hung in front of the shops.

It’s still early morning, so there were not many people around. The shopkeepers were more than happy to let you click pictures, or talk to you and answer your questions.

I think the place still has that quintessential Punjabi hospitality in its culture that welcomes everyone. Even at shops where I told them, I am not going to buy anything, they would welcome me and ask me if I would have a cup of tea. Where else would you find such hospitality!

It is a lovely gate-like structure which is not really a gate but a place for the common public to see the royal processions. It is located very close to the Qila Mubarak.

Qila Mubarak is the heart of the city and the last stop of Patiala Heritage Walk. You enter the fort through its large gates with large spikes all over which were meant to combat the enemy attacks. You land in a courtyard surrounded by giant buildings on all sides. This is when you realize the huge size of this fort. It took me some time to let it settle down.

Qila Mubarak was built in 1764, making it the oldest living structure of the city. Spread across 10 acres, the architecture blends the Rajasthani and Mughal Architecture. The pastel colors of delicate floral paintings remind you of Amer Fort near Jaipur. There are miniature paintings by Kangra artists.

Qila Mubarak is divided into two main parts. Qila Androon or the inner quarters have the royal living quarters. Outer areas have a huge Durbar hall, kitchen, a cold chamber, and a royal guest house.

We entered another arched gateway and on our left, we met the Gaddi of Baba Ala Singh. This is where he used to sit and is a place of reverence now. The seat is maintained as if he is alive in spirit with his picture sitting there.

As we walked inside the walls on either side had a hint of the paintings that would have existed. It was saddening to see that these lovely paintings have been ruthlessly whitewashed. Through a maze of narrow paths and steps, we reached a small room where a Jot or an Oil lamp is always burning. Apparently, this has been burning since the inception of this fort. Next to it are logs of wood-burning – called Dhooni. It belongs to spiritual masters.

On the top floor are the queen’s quarters. One of the kings had a French queen and there are French quarters of hers with distinct European arches. You can see the palaces below with char bagh style gardens.

The high point of Qila Mubarak is the painted chamber – which is painted in predominantly red and golden colors. It reminded me of the Amar Mahal in Junagadh Palace of Bikaner. The paintings tell tales of Krishna and royal scenes. I never expected Patiala to have such a rich repository of miniature wall murals. It is a delight to stand there surrounded by colorful stories. I hope Punjab Tourism documents and preserves them well.

One of the wooden doors is studded with ivory and carved intricately.

Durbar Hall in the outer part of the fort is another marvel. It is a huge hall with a ceiling of at least 70 feet high. The wooden doors in black are intricately carved. The huge chandeliers hanging from the ceiling would make you wonder about the strength of the ceiling which is any way without any support. An old Victoria coach was wrapped in plastic cover due to ongoing renovation work.

Pro Tip – At the moment Qila Mubarak is under renovation and you are allowed to go only to certain areas. 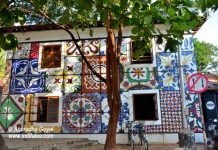 Govardhan Parvat Parikrama – All You Need To Know

Jain Temples Of Mehrauli Heritage Area Of The South Delhi

Memories Of A Lone Visit To New York, USA