When I was told about this seminary and the fact that it is the oldest seminary in Asia, I had no clue what a seminary is. Thanks to Google I learned that it is the place where priests in the Christian tradition are trained. So to tick off another first, I made my first visit to Rachol Seminary in South Goa.

From Curtorim, we drove towards the village of Raia and Rachol. A colorful arch built as part of a laterite stone wall welcomes the visitors. And also acts as a signboard of the seminary and the village. A small hillock on the left has a white church-like structure with a long wall on the side. The beautiful garden appears suddenly out of nowhere in the middle of rice fields. There were hardly any vehicles or people. So we peacefully parked the car and entered the only open door.

We roamed around this 400-year-old seminary that is a rectangular structure around a central courtyard with some curious pillars standing in it. There are long corridors with windows looking into the corridors on one side and rooms on another side. The church part was under renovation when I visited. But the tall hall is impressive with some colorful stucco work on the walls – a part of which I could capture from the upper window of the seminary.

The wall murals all over the walls of the seminary were the high point of this visit. There are so many wall murals – that is paintings that are directly painted on the walls. You can spend the whole day appreciating and understanding them. I do not understand Christian themes too much, but I could appreciate the detailing in the paintings in subtle colors. To see scenes from Christ’s lives with women in saris is something that makes the paintings unique – for seamlessly blending the local sensibilities with the themes of another land. I wish there was a way to guide visitors through these paintings.

I spoke to Noel, a teacher at this seminary and he explained to me how the seminary works. How the students are selected and then trained for 7 years before they can become priests. Candidates need to be a graduate and if they are not – they are provided support here to complete their graduation. I was surprised to hear that besides philosophy and theology, they are taught science as well. In fact, the physicist in me came out and we ended up discussing a few theories of the philosophy of physics.

The Rachol village was originally called Raitur and probably the Portuguese rendition of it is what it is called now. What is not common knowledge but well documented on the Goa Tourism website is that this was originally a Shiva temple. Excavations in the central courtyard have led to the discovery of a statue of Nandi – the vehicle of Shiva and other Hindu sculptures. I did not see any sign of them in the seminary or even the acknowledgment of the same – a case of selective documentation of the history.

Stop by if you are in the vicinity i.e. a few km’s south of Madgaon.

Burhanpur: Where Taj Mahal Was To Be Originally Built 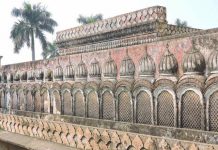 Faizabad – Legacy Of Nawabs Of Awadh