Ramnagar is a small town on the other shore of Ganga. That is the bank opposite the famous moon shaped Ghats of Varanasi. It houses a fort that is the official residence of Kashi Naresh i.e. the King of Kashi. I had very fond memories of visiting this fort as a kid. Riding on the boat from one of the ghats, crossing the Ganga while feeding the fishes and spending the day at the town.

My most vivid memory of the museum in the fort is that of a Queen’s heavy lehenga. That was supposed to weigh around 20 Kgs or so and I secretly wished to try it one day. This time, when I visited I knew that is not a possibility. But I did want to see that lehenga with a more trained eye. But alas it was no longer a part of the display that is open to the public.

Located just on banks of the other shore of the Ganga, this 18th CE fort is a representative of the Mughal era with its Jalis and Chhajas. The entrance gate is not huge but still, stands out in the humble surroundings of Lassi and Ganna Juice stalls that skirt the fort wall. The top part of the gate seems to be recently painted in multi-color. The rest of the palace inside is in yellow color with green windows and doors. One gateway inside the palace really exudes royalty. The rest of the palace seems like overgrown barracks of the early British era.

The lawns can definitely be better maintained as can the displays at the museum. The vintage cars on display with Banaras state numbers are asking to be dusted, as are silver Palkhis and grand ornaments of elephants. There is a generous display of arms that I usually tend to skip.

The biggest attraction of the museum is the astrological clock that displays both lunar and solar calendar. Besides time, it displays the position of sun and moon. Dates according to both calendars, Zodiac sign, and Navamsha. It ticks every second and strikes every hour, half hours and fifteen minutes. It is a huge clock that has been set according to the exact latitude, longitude, and height of city from sea level. Being a mechanical clock it needs to be wound once every 8 days. We assumed that the clock would have been made somewhere in Europe.

But we were delighted to know that it was made by a man called Mulchand in 1872 CE in Varanasi. Since then has only once been repaired by another man called Munnilal in 1923 CE. Think of the guarantees that come with products of 21st CE. My biggest regret is not being allowed to take a picture of the clock.

Ramnagar is also the venue for Varanasi’s famous month-long Ramlila. That used to and in some way continues to happen under the patronage of Kashi Naresh. I was told that it is a participatory form of Ramlila, something I wish to see some time in my life. The costumes and props used are displayed in the Bharat Kala Bhavan museum. There is a Ramlila museum as part of the palace. But it was closed when we visited.

Between the back wall of the fort and Ganga lie two small temples – both dedicated to Vyasa the ancient sage. The story of Vyasa goes like this. He was not treated well in Kashi or he took a vow to never enter Kashi and meditated at this shore of Ganga. The place came to be known as Vyasa Kashi. According to some beliefs, Kashi Yatra is not complete without visiting the Vyasa temple. Though the slim numbers at the temple hardly testify this legend. One of the temples has some paintings still left on its ceilings in green blue colors. You do get a hazy but panoramic view of the ghats of Kashi and the bridges across the river.

It is also the town of Lal Bahadur Shastri. But that is a story for another post. 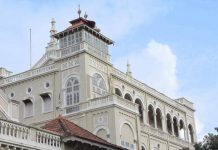 Kings Lodge Bandhavgarh At The National Park In MP

Satyagraha Ashram, Kochrab – Where The Mahatma Was Born