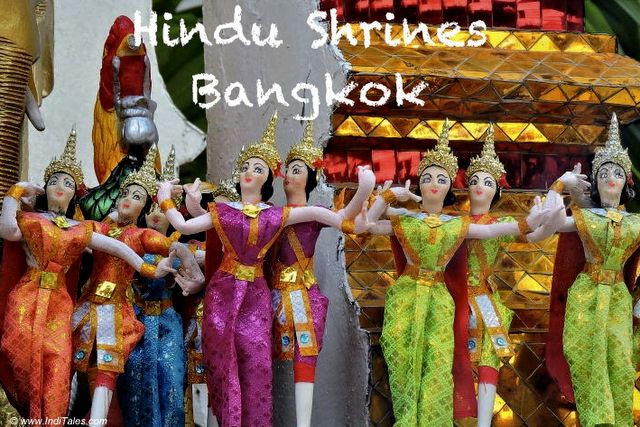 Ratchaprasong prides itself as being the heart of Bangkok. It is a bustling business district with the sky train and skywalk dominating its skyline. Wherever you stand, you see massive buildings, mostly shopping malls. When I first heard about a series of shrines here, I assumed they would be in some by-lanes – you can’t have the shrines on the busiest roads in Bangkok. With a walking map for the shrines, published by the Ratchaprasong Square trade association, I landed at Chitlom sky station one fine morning to discover the commerce and spirituality co-existing in the most harmonious way.

I read that people of Bangkok believe that these shrines can fulfill all their wishes. I only had to take a walk to realize the faith with which common citizen of Bangkok stops by these shrines to say a silent prayer.

Let me walk you through the seven shrines of Ratchaprasong.

Locally this shrine is called Phra Phrom though the popular name remains Erawan shrine. It is the most popular of Ratchaprasong shrines. It is dedicated to the Hindu deity Brahma (Phra Phrom does sound like a Thai version of Brahma) – the God who creates. Next time someone tells you that the only temple of Brahma exists only in Pushkar, tell them he extends his wings till South East Asia. Word Erawan comes from the elephant of Indra that we in India called Airavata. I could not figure out the Airavat and Brahma connection, it probably came from the Erawan hotel that led to the construction of this shrine. Erawan Shrine is also the biggest of the shrines in Ratchaprasong.

A shining bright four-sided idol of Brahma sits in the middle of an open temple-like structure. It is said Brahma’s four faces face the four cardinal directions. And believers believe that is the way he oversees his devotees in every direction.

The street outside this shrine is lined with flower and incense sellers. A typical offering consists of 12 incense sticks, four candles, four jasmine or marigold flower garlands and four pieces of gold leaf. You go around the shrine in a clockwise direction – just like we do parikrama in India. And offer 3 incense sticks, a candle, a garland, and a gold leaf to each face and make a wish. If a wish you made at Erawan shrine comes true you can thank the Brahma by commissioning the classical dancers and musicians to perform. Does that explain the existence of so many mandapas in our temples?

The story of Erawan Shrine

The story of Erawan shrine is interesting. This shrine came up in 1958 when the Erawan hotel (now Grand Hyatt Erawan) was being built. Lots of accidents were happening during the construction of the hotel. A Brahmin was called to look at the site and he suggested to build a shrine dedicated to Brahma. Since then this shrine has existed here and has been considered a harbinger of good fortune. I was curious when I heard the word Brahmin. My guide told me that Brahmins play an important role in Thai life including advising the king on various matters.

In March of 2006, the idol of Brahma was vandalized. The current idol has been recreated using the pieces of old one, precious metals and black lacquer that has been covered with gold leaf. A replica of this idol has been kept in the national museum for any future conservation needs.

I began my journey from Indra Shrine as I decided to see all the shrines in a clockwise manner from the point I was standing so it left a lasting impression on me. Indra shrine in front of Amarin Plaza is also known as Amarindaradhiraja. A statue in dark-colored jade with a thunderbolt in hand sits on a tall pedestal. Surrounded by many big and small elephant figures all around. I later learned that the favorite offering for Indra is an elephant figurine. That I guess is the devotee’s way to offer him his favorite vehicle – Airavata or an elephant. Apart from this marigold flowers and incense sticks are also offered. I saw people stopping by, taking off their shoes, folding their hands and murmuring a prayer, making an offering before beginning their day. Devotion on their faces could calm the passersby too.

Lord Vishnu mounted on his favorite vehicle Garuda stands on the side of the main road as Narayana – just outside Intercontinental Bangkok. This is a young shrine that was erected only in 1997 to protect businesses and worshippers from evil spirits. Literature though tells me that all things yellow are offered to Narayana – be it marigold flowers, be it yellow garments or be it sweets made in yellow color.

Narayana shrine looks more like an art installation than a shrine. I passed by it a few times but did not see any devotees stopping by to pray or to make a wish.

If Narayan is present somewhere, can Lakshmi, his consort be far behind? Well at Ratchaprasong, she lives a few floors above the Narayana shrine. On the 4th floor of the Gaysorn building, she stands atop a lotus pond wearing a pink Sari and bestowing prosperity to the ones who pray to her. Goddess of wealth is offered the symbols of wealth like bright pink lotuses, coins and interestingly sugar cane or sugar cane juice. This reminded me of the agrarian roots of most of our societies where there is no bigger wealth than your crop.

This shrine is open only after 10 AM and cannot be seen unless you climb the four floors. And navigate the open roof to reach the corner from where Lakshmi is overlooking most of the Ratchaprasong.

Trimurti refers to the Hindu trinity of Brahma, Vishnu, and Mahesh. Put together they are the most powerful entity in the whole universe. Four Vedas are depicted here as dogs along with the Kamadhenu cows. I was told Trimurti is these days treated as God of Love by the younger generation of Thai people. So, you see a lot of youngsters looking for love praying here. God of Love is offered all things red – Red candles, Red Roses, Red Incense Sticks, and Red Fruits. There is a belief that the Trimurti comes down every Tuesday and Thursday night around 9:30 PM to listen to the people praying here. On my next trip, I would try to make a visit in the evening on Tuesday or Thursday to see how people turn up to be heard directly by the three most powerful Gods.

Interesting, how the myths are formed and how our own beliefs keep strengthening those beliefs until they become a reality for future generations.

Ganesha, the son of Shiva and Parvati has a shrine next to the Trimurti Shrine in front of the Central world. A huge idol in gold with just a canopy on top sits peacefully as people come and pray. Ganesha is offered all kinds of food – fruits, desserts and of course his favorite Modaks.

This shrine is bang opposite the Ganesha Shrine on the other side of the road. Uma shrine is not mentioned in the literature but it was mentioned on the map at the sky station. So I decided to pay my respect to the Shakti as well. An idol in gold sits surrounded by small figurines. Not many devotees were around this shrine. Maybe she is not as popular but then she completes the pantheon as without her there would be no Shakti.

Uma figure was also surrounded by lots of small figures. On one side there were figures with open arms and on the other normal human figures. There was an offering of Coconut and other fruits. Uma shrine has two lion figures in front of it.

After this walk that took me through some of the biggest shopping malls in Bangkok and some of the most revered shrines, it felt as if they complement each other. People working in commercial establishments believe in the shrines and the shrines keep them blessed with lots of business.

Recommend you to read following Thailand Tourist attractions on my Travel Blog.

A walk through Erawan National Park at Kanchanaburi, Thailand

Kings Lodge Bandhavgarh At The National Park In MP