Magadi is a small town, rather, a Taluka in the Bangalore district. Located around 55 km west of Bangalore. I located this destination from the Deccan Herald archives that published a few offbeat day trip locations from Bangalore. After breakfast four of us started driving towards Magadi. It was a nightmare to get out of the city. The road near Kamakshipalya was jammed like Hosur road on a weekday. But after that, once you are out of the city, you are transported to a different world, literally. The road in the middle of the wilderness, crossing small villages on the way, the sleepy laid-back attitude of the people (or was it the Sunday impact), lots of greenery, fresh unpolluted air, and not much traffic.

On the way, there is Tippegondahalli reservoir, from where the whole of Bangalore city gets water. There is an inspection bungalow and guesthouse there where you can go and stay. But to enter that you need to carry a permission letter from Cauvery Bhavan in Bangalore. Which we obviously did not know about, and hence could not enter. There is a small dam there. Which you can see as you drive from the reservoir towards the town. There is a plant there which is situated in a valley and makes a good view. I am assuming that is a water purification plant.

Just before the village on the right-hand side is a Ramanath Swamy temple. Which had a ceremonial chariot standing outside it, with lots of Kerala-style craft on it? The temple appears old. Though did not look ancient. But I could not locate any date for it. The tank outside the temple made a good swimming pool for the kids and youngsters and made a good photo point. As soon as you come out of temple lane on your left you get a St Anthony’s church. It was a neat building, a very recent structure, and very meticulously maintained. The church was closed but they opened it for us. We spent a good time there in the serenity and quietness.

As soon as we came out of the church we realized that we are only 4 km away from Savandurga, the famous trekking/picnic spot, but we decided not to go there and explore the Ramnagaram route to drive back home and stop wherever we feel like for food. There were not many options for food anywhere on the way, so we parked the car at one place where we could see a water body and trees for shade. We had the food that we had carried with us in a picnic style and then headed back home. Surprisingly, after a day of driving, none of us felt even a wee bit tired and we all looked happy and we found ourselves planning the next trip already.

Incidentally, this was also the first time that I drove across the city on the Outer ring road. It was a sheer pleasure to be driving at 100 in Bangalore.

Recommend you read the following travel blog on places to visit in Bangalore.

A day trip to Kamlapur 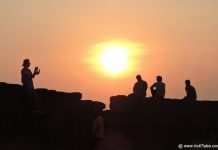 Govardhan Parvat Parikrama – All You Need To Know

Shirgaon Lairai Devi And The Seven Sisters Of Goa

7 Reasons For A Holiday At Sai Vishram Beach Resort, Byndoor