Area of Chhattisgarh is associated with the Ramayan, with legends of Ram during his stay in the forests of this area and his interactions with the tribals here. Buddhism is not really associated with this region, though Varanasi is not too far from here. So it came as a bit of a surprise to find a flourishing Tibetan settlement here. That owes its existence to recent history rather than ancient history. About 50 km’s from Ambikapur, passing through the village of Darima, you reach this hilly area. Climbing the hill through the dense forest, you reach Kamleshwarpur where on top of the hill you see a Buddhism-inspired restaurant. One of the best we saw in the whole of Chhattisgarh. Besides this restaurant, you can see the Mainpat Tibetan settlement.

In 1962-63 where a lot of Tibetans migrated to India, Government of India allotted them the land in various parts of the country that are now becoming the tourist attractions. In the erstwhile state of Madhya Pradesh, the government gave 3000 acres of land to about 1400 Tibetan immigrants. The population now stands at 2300 or so. They chose to live on this hill because the heat in the plains was not bearable for them. The higher altitude gave them some homely comfort. It used to be a complete jungle and lots of trees were cut to make it a settlement. Initially, there was one single camp that accommodated everyone. But later they were rehabilitated into seven different camps spread across the hill.

After coming here, people tried to engage themselves in herding sheep, something they were familiar with. But it did not work out as a viable option. Then their main office in Dharamshala trained them in agriculture and they started practicing the same. The potato grows well here and so does the buckwheat. They are also experimenting with microfinance, farm mechanization, and floor mills through a co-operative society model. Making handicrafts were their main engagement for a long time. That did not make much economic sense so they moved on to agricultural products.

As you walk through the settlement you see a small clean village with some basic but fairly large houses. There is a typically Buddhist temple called Takpo Monastery with a Dalai Lama picture on the altar. In the streets, you see a lot of young and very young Lamas in their traditional red robes. Colorful prayer flags line up the streets. White and golden domes with fluttering prayer flags can be seen from many places around the hill. Young Lamas use the motorcycles much like their counterparts across the country. Women wear their traditional dresses and go about doing their usual chores. Small kids in red robes have fun when the visitors come calling. And they enjoy showing around their place to them.

While walking around I could see a health center and a home for the old aged. And I thought in such a small settlement also do the old need a separate home. There are very few people left from the original contingent that came here to settle. For the next generations – this is home. As a visitor, you see them at home and as an immigrant at the same time.

On the outskirts of the settlement, near the restaurant, a Swiss tent camping site is being established overlooking the valley. During the Monsoon, this would be a beautiful place to relax in. There are various viewpoints on the hill with typical names like Tiger point because once upon a time Tigers could be sighted here. Machali or Fish point as the river here was known for a type of fish. There are other tourist attractions around the area like Bageecha and Zalzala that we could not visit.

There is a plan to create this area as an adventure tourism hotspot. While that may take some time and a lot of effort, you can visit this place for the sheer beauty of nature. The surrounding area is a bauxite mine. You can see mining trucks moving up and down the hill carrying the brittle reddish-brown stone that is supposed to be rich in Aluminum. There is a dedicated route to the top of the hill for the mining trucks. The temporary walls around the place are built with the same unique stone that looks very porous and brittle.

Mainpat was an unexpected surprise on my this trip.

Recommend you to read following Tourist Places in Chhattisgarh.

How To Do Kandy In A Day – What You Must See 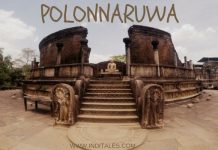 River Rafting At Bheemeshwari A Day Trip From Bangalore

Vegetarian Food In Sri Lanka You Must Try

Khatu Shyam – God Of The Defeated From Mahabharat