I was in Delhi for some work and for the first time I crossed Tihar Jail. But for the boards announcing its presence, I would have never figured out that this is the country’s most famous jail. I was still sorting out the dichotomy between reality & perception. Tihar Haat – a swanky-looking shop saw me in my face. I passed by it on the first day but made a mental note to stop over the next day.

The next day I stopped and the shop was just being opened. Sweepers were flashing their brooms, managers were arranging the freshly arrived stock of freshly baked bread and cakes. Outside the store was a small nursery with potted plants and grass patches. At the entrance, there was a small gallery with lots of paintings hanging all over the walls. I was told that the prisoners of the jail have done these paintings. I was still expecting a small range of handmade products in the shop but I could not have been more wrong. There were jewelry sets on display handcrafted by the female population of the place. If you look at them analytically, you can make out the design sensibilities of the maker and where they come from.

The Jail has its own brand called TJ’s, complete with the tagline ‘A Tihar Jail Initiative’. They produce soaps, shampoos, detergent powder, and eatables like snacks, cookies, pickles, and masalas under this brand. Another sub-brand for slightly up-market cosmetics is called Antarkranti. That roughly translates to the “inner revolution”. The packaging was impressive and tells the story of creating noble citizens through these initiatives. There were garments – branded men’s shirts, carpets, home linen, handbags. Handmade paper products, and stationery items among many things. Their website tells that the initiative has ISO quality certification. Must say it is being run professionally and that shows in the products and the store setup. I am sure the products would be available online soon enough though, their website mentions no contact e-mail.

There were books written by the inmates. A 4 volume set of Mahabharata, I was told was written by a Chennai jail inmate. A collection of poignant poems by women prisoners. Complete with illustrations called ‘Tinka Tinka Tihar’ makes you think about the fate of these women. Some of them may be more a victim of circumstances than their own doings.

A lot of these items meant that there are small manufacturing facilities inside the Jail. I really wanted to visit the premises and see this initiative live. After all Bollywood films have told us that the only things that prisoners do are break stones. And fight amongst them. A trip to the Tihar Jail initiative would have broken that perceptive stereotype. Maybe also provided a first-hand look at the people behind those tall walls who were born pretty much a part of our society. And may never get integrated the same way again.

I tried my best to convince the officials there to let me go inside. But they gave me a long list of procedures that I need to follow for the same. Including many approvals and it was not possible to do that on a 3-day visit to the city. I was just thinking if tourism can open a window for interaction between the worlds divided by the big walls. It may be a little ahead-of-the-time idea but is definitely worth exploring.

On a separate note, I bought an eggless cake from there. It was absolutely fresh and delicious. 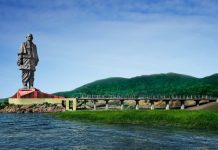