Thiruvananthapuram, formerly called Trivandrum is the capital city of Kerala. The city offers several popular Trivandrum Tourist Places like the beaches, temples, parks, museums, zoo, palaces and even a hill station to explore. Let us get to know this city through its tourist attractions.

Come with us to get a glimpse of this ancient city named after the abode of Vishnu – Anantapur. Vishnu is, of course, the presiding deity of the city and the region. Trivandrum is the anglicized version of the name. It is an ancient region that was known for its trade in spices, sandalwood, and ivory. Vizhinjam is probably the oldest living part of the city.

It was the capital of Martand Verma of Travancore kingdom who we know kept the Dutch away from India. His family legacy can be seen all over Thiruvananthapuram city in the form of palaces and temples. They continue to be the custodians of the famous Padmanabhaswamy temple.

Famous painter Raja Ravi Verma came from Travancore royal family. His work revolutionized the Indian calendar art forever. Some of his masterpieces can be seen in the city. His other works can be seen at Laxmivilas Palace in Vadodara as Maharaja Gaikwad of Baroda was one of his chief patrons.

In modern times, the city has played a role in India’s space programs.

Trivandrum Tourist Places – You Must Visit

Crown Jewel of Thiruvananthapuram is the ancient Padmanabhaswamy Temple dedicated to Mahavishnu or Adi Vishnu. It houses an image of him in black stone on Shesh Shaiya as he sleeps in the Kshirsagar with one hand hanging down and a lotus coming out of his navel. He is also the ruler of the region as the royal family just rules on his behalf. They call themselves Padmanabha Dasa.

The temple is best known for its wealth that is hidden in its vaults. I would say its real wealth is its lovely wall murals in rust orange color that tell so many tales. It is a huge temple where you have to wear a Mundu or an unstitched white cloth before you enter. Only women wearing Sari are exempt from wearing it.

Padmanabhaswamy temple is one of the 108 Divya Desams or they are the temples dedicated to Vishnu.

Kuthiramalika means palace of horses, it literally gets its name from 122 wood-carved horses that are a part of its architecture. This wooden palace is right next to the Padmanabhaswamy Temple, a part of it is open to the public. So, it is more like a museum now. I highly recommend you to visit it when you are in the state capital.

The wood architecture is amazing and unless you live in the deep south, you hardly see such architecture anymore. Wooden pillars, giant sloping roofs, corridors running around the house and intricate carved wooden panels in teakwood and rosewood – all the define native architecture. You get a glimpse of the Kerala life in these wooden houses way back in mid 19th CE when it was built.

Things you should not miss at Kuthiramalika Palace is Conch Shell insignia of Travancore kings, ivory artifacts,

One of the key attractions of the palace is the brackets in the shape of the horse in a row.

A section of the Kuthiramalika Palace has been converted into a museum to showcase the heritage artifacts of the erstwhile kingdom. Photography is not allowed in this section of the Palace. A guided tour is conducted with about 20 persons at a time.

Just a current day landmark, remnants of the Eastern Gate of the currently non-existent fort. In the busy city center, very close to the Padmanabhaswamy Temple, you will find it on the way.

Named after Lord Napier, former Governor-General of Madras, the museum is right in the heart of Trivandrum city. An Architectural masterpiece from 1857, it was designed by Robert Chisholm for erstwhile Maharaja, Uthram Thirunal.

Napier Museum is a landmark with its unique ornamentation style in red and pink tiles dotted with blue ones. Museum displays include sculptures in bronze and stone, paintings, the carving of wood and ivory, lamps, textiles, traditional musical instruments, and numismatic collections.

Photography is not allowed inside the museum.

Visiting hours: Napier museum is open from 10 AM – 5 PM. On Wednesday 1 PM-4:45 PM and closed on Mondays. You can easily spend an hour appreciating the heritage artifacts. A nominal fee is charged for entry.

I was introduced to this painter from the Travancore royal family when I read the biography of Raja Rai Varma. Knew about some of his paintings, but it was after reading I learned about his journey from Kerala to Mumbai under the patronage of Maharaja of Baroda. His original works are scattered all across the country. But the best places to see them are Baroda and Trivandrum.

Sri Chitra Gallery is an old-style building in white that has works of Raja Ravi Varma on display. Take your time and go around to admire the best-known painter from the city and the country. He is not alone at Sri Chitra Art Gallery, works of Tagore, Jamini Roy, Nicholas Roerich give him company along with many miniature paintings.

If you are an admirer of art & artwork, the Sri Chitra Art Gallery is a prime Trivandrum Tourist Places to visit.

Spread over 50 acres, Thiruvananthapuram Zoo is in the same complex as Napier museum. It is one of the oldest zoos in Asia dating back to early 19th CE when this region was under Travancore kings.  Animals like panthers, tigers, bears & deer were brought here and kept in iron cages. They were probably meant for the entertainment of the kings or maybe their trophy displays.

Over time, the cages have made way for the conservation approach to be with animals.

You can easily spend an hour or so walking around the zoological park.

Along with a variety of animals, birds here are a treat for birding enthusiasts. For those who like snakes, there is a reptile house. It is a lovely little nature trail bang in the middle of a big city.

Visiting Hours:10:00 AM. to 4:45 PM, Wednesday 1:00 PM to 4:45 PM, Monday closed. Make sure you enter 60 to 90 minutes prior to closure hours to be able to visit the expansive zoo. Nominal entry fee is charged. Photography allowed, camera charges applicable.

Kanakakkunu literally means Golden Hill Palace. Built during the reign of Travancore king  Sree Moolam Thirunal Maharaja, this was originally meant to be a guest house surrounded by lush nature on all sides surrounding the hills. It still remains an example of Kerala architecture and lifestyle.

It is a charming building in red with white pillars, and giant sloping roofs. These days it is a popular venue for cultural events in the city. Check out the events calendar of Suryakanthi and Nishagandhi auditoriums located here for cultural programs.

Beaches in and around Trivandrum

Located almost at the southern tip of mainland India, beaches cannot be far from this coastal city. Some of the popular beaches here are:

Kovalam means coconut groves and sure enough, you get to see many coconut trees on this beach. Located about 18 km from the city it is popular with the tourists as well as the local people. The most popular part of the beach is near the Vizhinjam lighthouse. Separated by rocks, other parts of the beach still belong more to the fishermen.

Kovalam beach had been popular with the westerners since the days of Travancore kings. However, not many know that it was also inhabited by the Hippies during the Hippie Trail era. It used to be a stop on way to Sri Lanka. You can feel the Hippie vibe if you stay on the beach.

Shankumugham beach is located on the western side of the city. This beach is important as Sri Padmanabhaswamy – the presiding deity of the city comes here in a procession led by the Travancore king and the royal family. It is also the beach where Ganpati Visarjan is done after Ganesh Chaturthi and where Bali Tarpan is done in Kartik Maas.

Veli Tourist Village is a popular point of interest for tourists.

Padmanabhapuram Palace is the largest wooden structure located in Padmanabhapuram, about 60 km from the state capital. The original palace is more than 400 years old. Though the current structure was built in mid 18th CE during the reign of Martanda Varma. This place then was the capital of Travancore Kingdom. Before it was moved to Thiruvananthapuram towards the end of 18th CE.

Ponmudi literally means golden. You have to visit these hills that are at the fag end of western ghats to see what it really means. The hairpin bends on the roads lead you to the top of Ponmudi hills. There you see layers of hills all around you. It is difficult to imagine that you are so close to the sea.

Built-in 17th CE by Queen Umayamma of Venad, Koyikkal palace is another stunning example of Kerala architecture with wood carved facades and open courtyards. This palace is home to the museum of folklore and numismatics.

We saw some interesting displays here apart from old coins are like old weights, weighing scales, musical instruments and of course the exquisite wood-carved pieces.

Interesting places to note are the courtyard and the Darbar Hall of the palace.

You will also find many intricately carved wooden panels in the palace.

Most popular day trip from the state capital is Kanyakumari. Famous for Vivekananda Rock Memorial and a giant statue of the poet Thiruvalluvar. My recommendation is you should visit Kanyakumari. It is important that you stay overnight there, just to watch the beauty of sunrise and sunset over the confluence of the 3 seas, namely Bay of Bengal, Indian Ocean & the Arabian Sea.

There are many package tours available from the state capital to visit Kanyakumari. They also cover Padmanabapuram Palace and Koyikkal Palace en route. You can also drive on on your own.

How to explore Trivandrum tourist places

You may simply classify them into two parts. The day trips from the city and the in-city tourist places to visit. Plan your day trips. The Kerala State Tourism Development Corporation or KSTDC conducts day trips. Do visit Kanyakumari, the land’s end, it is spectacular. In the city do visit the Padmanabhaswamy Temple and Kuthiramalika Palace. They are adjacent to each other. And of course the Napier Museum & Raja Ravi Varma art gallery, which are 4 to 5 KMs away. You can hire an autorickshaw and reach in 10 minutes.

Beaches are always great to spend some quality time and relax. The Shankumugham beach is 6-8 KM’s from Padmanabhswamy Temple. Kovalam beach is approximately 14-16 KM’s away. Varkala beach is 50 KM’s away. The city buses and auto rickshaws are the easiest, economical way to reach these destinations.

Do let us know which are your favorite amongst these. 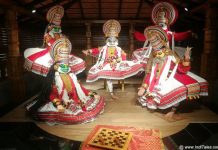 Glimpses From The Monda Market, Hyderabad