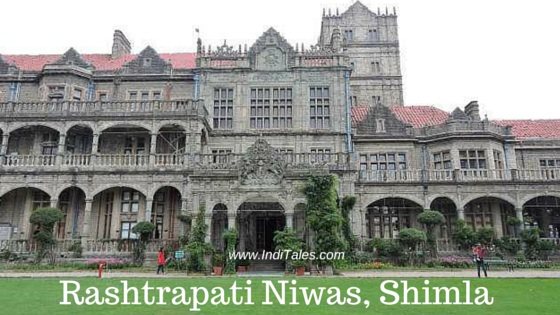 Shimla was the favorite hill town of British. It served as their summer capital for many years. How can it not have their imprint on its hills! One of the most beautiful imprints is the erstwhile Viceregal Lodge. It is now called Rashtrapati Niwas. The building is home to the Indian Institute of Advanced Study. But still, continues to be time wrapped in the days when this was a hot spot of action just before India got its independence from the British.

Rashtrapati Niwas is open to the public. You can take the ticketed guided tours inside the building and roam around in its sprawling lawns on your own.

It stands on the Observatory Hill that has a unique characteristic. Water from one side of this hill flows to the Bay of Bengal in the east and water from other side flows to the Arabian Sea in the west.

The initial estimated cost of this building was Rs 38 Lakh with an annual upkeep of Rs 1.5 Lakhs. Remember we are talking about the 1880s.

The architecture of the building draws from the English Renaissance. But you can see the resemblance to castles of Scotland.

Viceregal Lodge spreads across 110 acres of land. Most of it is covered with a variety of flowers and grasses. Initially, it was three times this size. It is a delight for nature lovers to walk through colorful flowers – some of them of rare varieties. A walk around the garden not only takes you through manicured gardens but also lets you admire the regal building from a distance. You can see it in its entirety. Remember you are walking on one of the highest gardens in the world.

Teak was brought in from Burma. Along with the local deodar and walnut wood, elaborate wall panels were created for the interiors. The massive woodwork can still be seen in all its glory in the main hall of the building. A wall here displayed war weapons of Indian origin. You can still see their impressions on the tall wall.

The building has an inbuilt rainwater harvesting system with water tanks below the lawns. All the water from the top of the building flows to these tanks and is used for the purpose of gardening.

The building has also an inbuilt fire extinguishing mechanism that automatically triggers sprinklers as soon as the temperature goes above 60 degrees. It has never been practically used. But the guide said it is tested every few months and is in working condition. Incredible!

General Electric did electrification of the Viceregal Lodge with all concealed wiring, way back in 1887. Look back, they must be damn proud of themselves.

First residents Lord and Lady Dufferin moved here in 1888. But the additions to this building kept happening till 1927.

Viceregal Lodge has been witness to the historic ‘Simla Conference’ that led to the partition of India. In fact, the table on which the partition papers were prepared is still displayed in the building. Almost all big leaders of the time like Jawaharlal Nehru, Maulana Azad, Liaqat Ali Khan, Master Tara Singh, and Mohammed Ali Jinnah attended the conference. Pictures of the same adorn the walls now.

After Independence, the building got its new name ‘Rashtrapati Niwas’ and a new resident – President of India. With an even bigger residence in New Delhi, I assume earlier Presidents of India used this as a summer holiday home. Currently, President of India has another summer home in Shimla called ‘The Retreat’.

Do you know President of India even has a winter home in Hyderabad called Rashtrapati Nilayam !

Rashtrapati Niwas, Shimla is also home to the Indian Institute of Advanced Study. An institute to promote the research in the areas of humanities, social & natural sciences. If you hold a Ph.D., you can apply for the fellowship of this institute. And do your research from what looked like a perfect environment to read and write to me.

3 photo galleries showcase the Imperial Shimla, Pre-Independence activities in Shimla, and the Indian Institute of Advanced Studies. The guided tour takes the visitors through these 3 galleries. Old pictures of Shimla being out of the town as it was then. The furniture in the rooms would add to that ambiance. I particularly remember a picture of Rajkumari Amrit Kaur waiting for Gandhi Ji outside her own house in Shimla.

Indian Institute of Advanced Study has a brilliant library in the room that used to be the ballroom. They have whopping 1.5 lakh titles that are displayed across two levels. I took a walk around the library and could have lived there.

No photography is allowed inside the building but the Institute website lets you take a virtual tour of the library and photo galleries open to the public.

In fact, there is a small bookshelf in each room with rare and historical books proudly displayed. I saw a lot of books about Art history. Hope that one day I would be able to go to do some research on this lovely piece of history.

In the gardens, I found a sculpture by Goan artist Subodh Kerkar. The dancing girl of Indus Valley civilization. Created in a negative space and mounted on the railway lines, remembering her discovery by a Railway Engineer.

Recommend you to read the following places to visit in Himachal.

Sacred Mount Merapi Tour At The Java Island Of Indonesia

The Fort At Ferozabad aka Feroz Shah Kotla Fort, Delhi