Budget season is when everyone in the country is looking at the parliament, anxious about its impact. The plans may have to change, some things may get added to the shopping list while others may get dropped. While looking at visuals of the parliament house in media, I got reminded of my visit to Rajya Sabha last year. And I realized I have not written about it. This is not a tourist destination. But let me tell you it is in no way less fascinating than any other tourist destination in the city.

You may not know that as a citizen of India you can visit the parliament. And see the proceedings of the house from the public gallery. Children below the age of ten are not allowed inside, but anyone above that age can visit. The process to visit is documented here on the Rajya Sabha website. Google Devta did not help in locating a similar document for Lok Sabha. But I think the process may not be different. You need to know a member of parliament or an official of the Rajya Sabha to be able to visit the house. They will apply for a visitor’s pass for you on your behalf, using which you will be given access to the house.

There are many galleries on the first floor of the house, above the hall where the members sit. Apart from the public gallery meant for the general public, there are five other galleries. Press Gallery is obviously meant for media personnel. Distinguished visitor’s gallery meant for legislative members, spouses of the parliament members and other distinguished public figures. Lok Sabha member’s gallery is for the members of the lower house to witness the proceedings of the upper house. A special box is meant for governors of the states, guests of the president and visiting heads of states. The official gallery is for the government officials who need to participate in the house discussions. As an ordinary citizen, you get to sit in the public gallery. It has a seating capacity of 160, and usually, a pass is issued only for one hour that is specified on the pass.

The experience of Visiting

Though you can see all the proceedings live on TV through almost static cameras. And keep yourself apprised of what our elected members are doing. But being there in the same space as they are is an experience in itself. A fascinating part for me was the formal protocol followed by the members. They all address the chair of the house, which in the case of Rajya Sabha is vice-president of India. And they speak to each other through him or her. It is almost a school classroom kind of environment where students seated on their uniform red benches are not allowed to speak to each other. They must communicate through the teacher.

Another fascinating feature is the headphones where you can switch the language in which you want to hear the proceedings. There are live interpreters sitting somewhere, I could not make out where. They interpret the spoken word almost instantaneously for you to hear. This is important, as most members tend to speak in their chosen language that may not be understood by others. Just by choosing the right number, you can hear the content in your chosen language. I also liked walking around the pillared corridor of the majestic building that we all recognize so well. The place is grand with its broad corridor running around the building with verses written in few places. Large image of Mahatma Gandhi in the lawns is sure to catch your attention. It makes you wonder if things would have been different if he was present in blood and flesh instead of stone.

I must tell you about the security gates that you have to cross to reach the public gallery. You are not allowed to carry anything with you. No mobiles, no cameras, no pen, and paper. Nothing except maybe a wallet with only cash in it. There are counters available where you can leave your stuff. But it is better to leave it in your car or at home. Just take yourself. You will be screened at various places, on every floor by a security officer. You will be instructed that you must sit straight, you cannot cross your legs or put them one upon the other, or put them on the chair and restrict your movements to the minimum.

In case you happen to do any of these unconsciously, be sure someone will come and tell you to behave yourself. You are obviously expected to maintain silence. And listen to the noise your selected members are making downstairs.

During my visit, it was the Question hour that was going on. And after a few questions, the opposition staged a walkout. We got to see many political leaders and a couple of business leaders and film stars. As a token of our visit, we were given a Rajya Sabha greeting card. As I walked out of the building, it was like first-hand learning of something that we have known since the days of our first social science lesson in school.

Recommended read the following Places to visit in Delhi

Recommend you to read about Walking Tours of Delhi, Explore Delhi, Delhi Tourist Destinations, etc, I have posted on my Travel Blog.

The Fort at Ferozabad aka Feroz Shah Kotla

In and Around Purana Qila

Walking on the Walls of Lal Kot 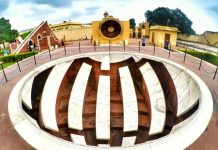 Places To Visit In Gokarna For Devotees And Leisure Travelers

Bhagoria Festival Of The Bhil Tribes In Madhya Pradesh

Walking Around The Jaisalmer Fort Or Golden Fort