A little ahead of the town of Bicholim in North Goa, lies a small village that is now called Arvalem. It was originally called Harvale or Harvalem. It is best known for its 60 feet high, all-season waterfall and the ancient caves that have many legends associated with them. This is all I knew when I decided to go and explore this hamlet in Goa. It was raining cats and dogs and our drive on the way could not have been more scenic. Passing by many big and small villages of North Goa, we reached there. 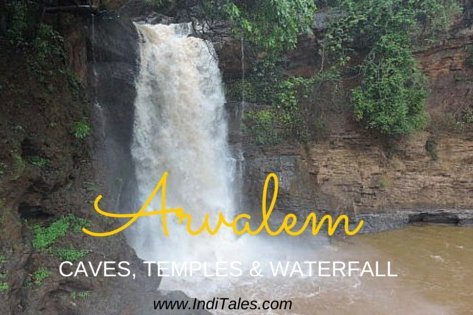 The first thing we saw as soon as we reached was the ancient caves. Since it was raining heavily, we decided to come back to the caves later and reached a small temple called Rudreshwar Mahadev temple. A temple board pronounced this place a Tirth Kshetra – making it religiously important for the Hindus. I step inside the temple and find a lovely Shivalinga with a silver canopy on top pretty much like the one at Mangeshi Temple in Ponda. I sat down to chat with the priest and he told me that this Shivalinga is Swayambhu or meaning that is not man-made but self-manifested.

The temple is believed to be thousands of years old. Well, the small temple does look old and a new huge hall is being constructed. By the side of the temple is the house of the temple priest – this is a lovely and huge house in typical Goan architecture.

I stepped in and requested the priest to tell me the story of the place. I learned that this is a temple devoted to the Rudra form of Shiva. And this is a temple where the last rites of Hindus are performed after the mortal remains are immersed in the waters of the river formed by the waterfall next door. He went on to tell me the legends associated with Goan Heritage – the caves, and waterfalls and pointed us to another temple across the stream that belongs to the Jain Gujarati community. I had plenty to explore now in the Goa hinterlands tourism.

Rain gods were taking a breather and I decided to go to the seasonal Goa waterfall. A small flight of steps took me to the platform that seems to have been made especially for viewing and admiring the waterfall from a vantage point. A shower of droplets welcomed us as we moved toward this platform.

I did manage to shoot this small video for you. If you are on Goa Holiday and wish to explore the Goa hinterland tourist places, this is one for you.

The water from the waterfall falls into a pond-like formation. From here it overflows into a stream that circumvents the Rudreshwar temple before it passes through jungles and villages to merge with my favorite Mandovi. The priest told me that this pond was formed when Bheema, the second Pandava, diverted the water from somewhere else here during their stay in the Arvalem caves nearby.

I crossed a small iron bridge to reach the other side of the stream and climbed a bit to reach another temple. The place is officially known as the 43rd Baithak of Mahaprabhu Vallabhacharya – a Gujarati Saint. I was told that more than 500-year-old Gujarati scriptures mention this place in detail – including the mention of the Rudreshwar temple, the waterfalls, and the Caves. Inside the temple, I was told it is closed – come another day. A bit of request and a bit of interest brought the priest out and he opened the place for us.

What is worshiped here is a pair of footmarks on laterite stone – as a mark of the guru who once sat here and preached? Who would have thought that in a remote corner of Goa lives a piece of Gujarat? These Goa heritage sites are worth visiting if you love our heritage.

Rain gods obliged and we finally reached the caves. These are the simplest excavated caves I have seen anywhere in India. The large laterite rock has been cut to create 6 rooms. There is no carving’s whatsoever. However, this may be due to the nature of stone that restricts any kind of fine carvings.

In 5 rooms there are 5 Shivalingas installed and they are in black granite stone. Legend is that during their ‘Agyat Vaas’ or exile Pandavas came and stayed here in these caves for a while. They used 5 rooms in these caves to worship Shiva. The sixth room is supposed to be Draupadi’s kitchen and this room was intriguing – like modern kitchens it has a platform running on one side of the room. This platform has 8 equal-sized, equidistant depressions – almost like a cooking station.

Now in all probability, these depressions have been formed by water falling on the platform. But at first impression, you almost feel like entering a modern kitchen.

There is a debate on whether the caves are Hindu or Buddhist. As of now, there are Shivalingas present in the caves indicating their Hindu past and present. It is said even a bust of Buddha was found near the caves. There is another bust that was found in the Southern part of Goa at Rivona Caves. These are the only known signs of Buddhism in Goa. But then it was quite prevalent in neighboring Maharashtra and Karnataka.

My take is that most caves in India were excavated after the 3rd BCE or so. The earliest known caves are the Barabar caves in Bihar near Bodh Gaya. These caves are cut in a similar fashion and may have been used by wandering minstrels of the faiths in practice here. They may have been used by the pilgrims who came to the Rudreshwar temple to perform the rituals for their departed family members in ancient times. Traders passing through this region would be another set of users for these caves.

If you are a culture and heritage-loving Goa tourist, add Arvalem caves to your Goa Holidays itinerary.

Walking around a small area of a few hundred sq. meters, I found so many legends, so many stories, different faiths, and natural beauty. India, you never cease to amaze me. 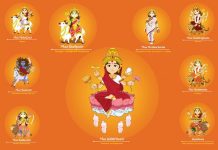 Weekend In Pondicherry aka Puducherry