I am an ardent fan of Old Indian Film songs. I owe it to my growing up in the Doordarshan era. Today when I look at my favorite songs on YouTube, I see the iconic locations as they were 40, 50 or 60 years ago. Sometimes I also get the glimpse of the Indian monuments that are now out of bounds for us.

Let me take you down the memory lane with some of these are iconic locations where some timeless songs were shot.

Let us call it the Bollywood’s yesteryear journey through Incredible India!

In this film adaptation of R K Narayan’s Guide, Waheeda Rehman dances, almost making us want to dance with her, to the unforgettable lyrics written by Shailendra. One can’t miss the various picturesque shots of the Chittorgarh fort. In fact for a long time, till I visited the fort, this song was my reference for the visuals of this fort. I now admire the skill of the filmmaker to get the Vijaystambh in perspective. And capturing other nuances with his lens.

Indeed, the song acts as a musical guide of the fort!

Dev Anand and Hema Malini play Chor & Sipahi i.e Thief & Cop, as they try to deceive each other in iconic film Johny Mera Naam. Playing hide and seek in the ruins of Nalanda in Bihar.

The world’s second oldest university with its Buddhist temples, its expansive campus in red bricks is a perfect backdrop for the Song. In fact, the cable car used in the song is in nearby Rajgir. When I visited Nalanda and Rajgir in 2011, both the places were exactly as they were shot more than 40 years back. The cable car was as scary and as bare. For Nalanda, of course, 40 years is too small a period to change. It has stood as it is for many centuries. I found it exactly as Hema Malini and Dev Anand would have found it before I was born.

This song features two iconic Shiva temples of Kashmir. It begins with the steps of Shankaracharya temple atop Shankaracharya hill in Srinagar. But within few second, moves to Maharani Shiv Ji temple at Gulmarg where the majority of it is shot. It’s fair to assume it would have been shot during the summer months as you see greenery all around as when I visited it in November, the green color was hard to spot. Kashmir was the most favorite of Indian destinations to shoot for filmmakers through the 1960s and 1970s

Music of R D Burman and the freestyle Masti filled dance of Rajesh Khanna and Mumtaz in the film Aap Ki Kasam are something that would make anyone peppy on a dull day.

Read More: Things to do in Gulmarg

Now this one is an immortal Black & White song from Tere Ghar Ke Saamne shot at Qutub Minar. Nutan has never looked more beautiful and the song has the playful energy woven into the melody of S D Burman’s music.

The song is very special as it takes you inside the Qutub Minar. As you know for many years now, no one is allowed inside the Qutub Minar. So this song became my entry into that forbidden world inside Qutub Minar. It feels it has been shot in a rather shorter section of the Minar as you see the same stones through the song. But you can figure out that the gap between the inner pillar and outer wall is wide enough for 3-4 people to walk easily.

How I wish makers of the film has stepped behind and captured the Mehrauli of the early 1960s when some monuments would have been intact.

This remains my favorite! I have yearned to go to Kashmir after watching it innumerable times and can never be bored with this song. It just has everything for everyone. The theatrics of Shammi Kapoor, the bubbly dimpled smile of Sharmila Tagore, the exhilarating tone of Mohd  Rafi and the colorful boats plying on the superlatively beautiful Dal Lake from the film Kashmir ki kali.

The houseboats and Shikaras in the backdrop of lakes lined with Chinar trees and Mughal gardens – can there be a better Indian destination to film a youthful song!

I am sure this song played its part in making Houseboats in Srinagar one of the top Indian destinations for tourists visiting Kashmir.

Depicting the love story of an aristocrat in the film Rajkumar, the song glides through the heritage structures of Mahabalipuram, near Chennai. You see Sadhna and Shammi Kapur playing around the five Rathas of Pandavas as they sing and dance to hanker Jaikishan’s music.

If you visit Mahabalipuram now, you see this almost as you can see in this song. The giant elephant stands as it is as do the 5 Rathas. The place seems as clean as it was when I last visited it in 2012. I do not recall the monument where Shammi  Kapoor is on top of a temple and the second half of the song is, of course, shot in a studio. I assume shooting at Indian destinations is not an easy task.

This haunting melody from the controversial political drama, this song from Aandhi takes us on a virtual tour through the ruins of Avantipur temples. They were built by King Lalitaditya and Avantivarman, located in Kashmir somewhere between Srinagar & Anantnag.  The ruins in dark grey stone add to the texture of the song and always leave me wanting.

Every time I look at this song, I sigh and take a mental note of visiting Avantipur, one of the Indian Destinations that is still evading me. Hopefully someday soon!

The title song of Gurudutt’s 1960 musical blockbuster was a tribute to the city of Lucknow, the latter capital of Awadh Kingdom. It also offers glimpses of the regal structures of the Nawab era that are now popular Indian destinations like the various Baghs and Imambaras. The name of the city derives from Lakshmana of Ramayana who was believed to have built Lakshmanapuri which later was known as Lakhanavati, shortened to Lakhnav. Along with Varanasi and Agra, Lucknow forms the third vertex of the UP Tourism’s Heritage Arch. The cultural folklore speaks of savoring Banaras ki Subah and Awadh Ki Shaam i.e Morning of Varanasi and evening of Lucknow. The poetry and the cuisine of Lucknow never fail to claim their unique mention in the cultural annals.

The rhythm of Chaos on the Shores of Ganga

Taj Mahal – Most photogenic monument in the world

This evergreen song from the film Aradhana needs no introduction. Probably the call of the heart of every boy waiting for his right better half and the dream of every girl to be stalked by someone like Rajesh Khanna (and mine is to find those earrings, Sharmila was wearing). The famed Darjeeling train passing through the lush green wilderness and vast tea estates are absolutely like freshness Darjeeling tea brings to our lives.  Is it not just the apt ambiance for two lovelorn hearts to meet.

I am yet to go to Darjeeling, but I am sure the roads would no longer be as empty.

The Darjeeling Himalayan Railway pictured in the song is a UNESCO World Heritage Site.

This romantic song echoes amidst the awe-striking walls of the Golconda fort at Hyderabad. Built by Kakatiya Kings as a mud fort and it is better known for the Koh-i-Noor and Hope diamond that was found here. Golconda Fort is an architectural marvel as far as acoustics are concerned. A clap from the top of the tower would echo and alert the guards standing 300+ steps away on a hill.

The fortress makes a perfect retreat from the city of Hyderabad and the soulful music of Laxmikanth Pyarelal uniquely captures the expression of love on the innocence of Jaya Bhaduri.

Had the filmmakers stepped a bit outside the Golconda Fort, they would have got the best examples of Deccani Architecture.

Tell me more songs from the golden era of films with Indian Destinations!

This post has been written in collaboration with SaiSwaroopa Iyer  –  a Venture capital professional turned author with a keen interest in Indian history, literature, music, and poetry. Check out her book Abhaya that picks up old stories to sort out new age problems. 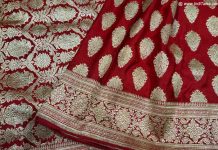 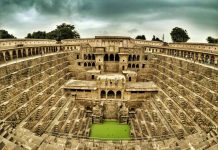 An Evening With Mahila Mandali At Sagar