After its legendary musicians, Dharwad is best known for its Pedha. I remember when I first tasted it in Bangalore about 10-12 years ago. My first reaction was – this is Mathura Pedha. I probably invoked the Kannada pride in my friends, and they all claimed that this is pure Dharwad Pedha, you get it nowhere but in this educational hub city. My gut feeling very strongly said – there is a connection between this Pedha and the famous Mathura Pedha. It was years after that conversation when I found myself at the famous Babusingh Thakur’s shop in Line Bazaar that I untangled the connection.

Babusingh’s Thakur Pedha Shop is nothing like the iconic status it holds in the state of Karnataka. It is like a hole in the wall being managed by two youngsters. Add to this the fact that this small shop lends the name to this street – Line bazaar. As there used to be a long queue every morning to buy these Pedha’s. I would later learn that in its hay days no one could buy more than 500 gms of Pedha in the interest of people in the long queue.

I walked up to the shop and asked to meet the owner. The staff was flabbergasted – he does not meet the customers. I persisted and he gave me the number of a younger scion of the family. And almost challenged me that they will never allow me to take pictures of the Pedha – Yes, I had the camera hanging around my neck.

I did manage to get a meeting with Babusingh Thakur, grandson of the original BabuSingh Thakur who brought this iconic sweet to the city. Sitting in his house, right behind the shop, I got to hear about the family that originally hails from UP but reached this city via Unnao in Bengal. He agreed that the Mathura Pedha is the parent of this local popular sweet dish. I suddenly felt proud of my taste buds. I saw him speaking to his staff in Kannada and was curious about what language do they speak at home. He promptly said ‘Hindi’ and thereafter I spoke to him in Shuddh Hindi. He then proceeded to tell me how his father and grandfather would make Pedha’s at home every morning and sell them at this very shop.

He nostalgically spoke about the long queues and how the sweets used to get finished between 10 AM and 12 AM. Since they made all sweets at home by themselves, they could not make more than 50 kgs or so per day. This reminded me of Indian sweets like Chitale Bandhu Bhakarwadi in Pune that also used to be sold out in a couple of hours every day.

Now, of course, many Pedha Chains have come up in the city. Incidentally, most of them have their origins in UP. As a natural progression in the last 7-8 years, Babusingh Pedha has also expanded, with three factories and many showrooms across multiple cities. In fact, at the city bus stop, I could see their imprint everywhere. On average, they produce 700-800 Kgs of Pedha every day. They have also added other popular Indian sweets like Laddu and bakery items including bread to their portfolio. The growing menace of Diabetes is troubling the sweet makers. And Mr. Thakur spoke about the various experiments they are doing to make sugar free Indian sweets.

The Baniya in me was curious to see the factory. Mr. Thakur agreed to show me on one condition that I will not click any pictures. I understood that it is their business secret that they do not want to let out. In fact, during the factory visit, I learned that the family still maintains the formula close to their heart. And they do the mixing themselves every morning so that even the workers working on the Pedha if poached by competition do not know the formula. The only trick I could pick up from the visit was that they still condense the milk on a wood fire and not on gas or electric heat.

I had never been to a sweets factory. So it was nice to walk around with savories being made in a big room – they tasted so fresh right out of the pan. The bread was being baked and packed in another, cakes in another, and other sweets in the third room. The biggest room was dedicated to Pedha’s of course. They still pack the small boxes in steel trunks to transport them to their shops across the city. 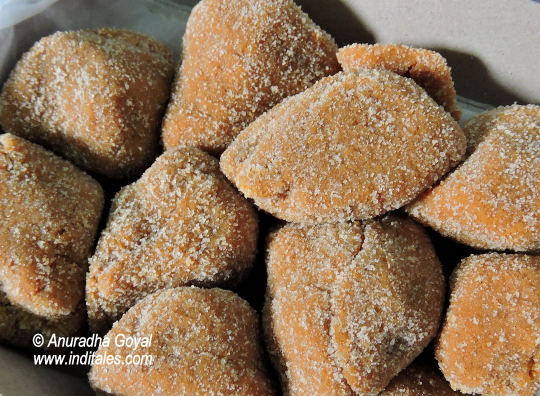 It was fascinating to learn the journey of an iconic Indian sweet right from the horse’s mouth and to be able to see it being made right in front of you.

Do taste this sweet delicacy as and when you get a chance.

Here are a few places to visit in Hubli-Dharwad and nearby, read & explore.

Discovering a Poet at Bendre Bhavan

Rendezvous With A Female Buddhist Oracle In Ladakh

The Deltin Daman – A Luxury Resort At Daman