If I am asked to describe Hampi in a sentence I would call it a Photographer’s Delight. A place to de-stress for the stressed lot and a curiosity for the historically inclined, in that order.

A long weekend, courtesy Karnataka Rajyotsava Day. I and Divya decided to go to Hampi. All equipped with our photography gears, with train tickets in our bags and with no clue where we are going to stay there. Our prized possession for the trip was our cameras. One digital for the ease and economy and one SLR for the quality. That’s all we had in cameras is beside the point.

Friday evening, Divya making last-minute calls to her customers, managed to somehow meet me at 9:00 PM and we managed to catch the train. Since it was a late night train, we slept off as soon as the train started from Bangalore. None of us had a clue what time does the train reaches Hospet, or is Hospet the last station or an on-the-way station. Sometime in the middle of the night, I asked someone, what time does this train reaches Hospet and when he said 7:30, I slept off comfortably.

I woke up at my regular time that is 6:00 AM. Then had this constant itch to wake up Divya, but I held myself for an hour or so. Post which I woke her up saying ‘Station aa Gaya hai’. We started clicking pics, with fellow passengers in the train modeling for us. The train got delayed a bit and both of us were damn hungry now.

As soon as we landed at Hospet, KSTDC counter was right there at the railway station. Though it was nothing more than a table where the guy will take money from you without giving a receipt. Call up someone and give your names and the booking for the day-long guided tour is done. The boarding for the tourist bus was about a KM from the station. We reached that place and there was this Hotel called ‘Shanbhag Hotel’.

It was serving hot south Indian breakfast. You may find it difficult to believe that everything there was just for Rs 5/-. 5 pooris for 5 Rs, 4 Idlis for 5 Rs, amazing. I am still wondering about that guy’s business model. This was not even a roadside shop, it was a proper eating joint. We ate, ate and ate, out of hunger. And to ensure that we have enough even if we do not get a good lunch place. With our ‘Pet Pooja’ done, we proceeded to the bus. We had no clue what is in store for us that day. As soon as we started seeing some ruined old buildings, we wanted the bus to stop. But the bus had a chartered path which it had to take.

So treading through narrow lanes in the midst of some of the most picturesque locations, we reached Virupaksha Temple. Which is the only temple now from the old city of Hampi, where Pooja is still performed? The guide explained a bit of history of the temple and the various idols like the one of Nandi had been taken out as the idols were Khandit or broken. There was typical architecture in the temple that we saw across the city later. I could not gather the name of the kind of architecture, but it had a basis of pillars and long corridors. And all that I could gather from the guide was that it had evolved from multiple architectures from the preceding eras. We clicked pics of big bells, ornate pillars, long corridors, typical structures of four pillars with a roof.

Places to visit in Hampi

We saw the various huge monolithic Ganesha, Hanuman and Shivalinga statues. Most of which were Khandit and hence were no longer worshiped. There are about 350 temples in that city of 33 sq. km. Most of them are totally destroyed and have no idols within them. But the carvings on the pillars are worth admiring. They make you wonder how artists can weave such magic onto a stone and make it speak like a storyteller. Each stone has a story to tell. Whether in the form of the royal signage of that era, the games people played those days, the entertainment and the lifestyle. The epics of that Hindu mythology that were the basis of very life as they can be found all over the place. There are temple structures over the hillocks, on the ground and underground too.

Lotus Mahal was the place where the queens used to live in summers. It had a typical corridor structure to keep the palace cool. There was some canal routed through the palace to give the water cooling. It adorned a lovely feminine pink color. For a minute if you close your eyes and let your eyes imagine all the grandeur it would have had in its hay days, you would be lost in the lost glory of the place.

Close to it was the place where elephants were kept and the guard’s quarters. There are a few Muslim monuments also there, but we could see them while passing by only.

Then there was the Queen’s bath, whereas the name says Queen’s used to take bath. It’s absolutely ruined. But the ruins still tell that it was probably one the best-decorated building in those days. A lady in vibrant pink gave me perfect pose from a balcony on the first floor. There was a platform on which the Kings used to see the Navratri festival. A big bath tank has been discovered not too long ago there. It’s an architectural masterpiece. The canal used to fill it with water from River Tungabhadra. It has symmetric steps in black stone on all the four sides, but the steps are not continuous. They make a triangular pattern, and give the feeling of multiple pyramids kept side by side.

Finally, toward the end of the tour, we reached Vittala temple, which is known for its chariot carved out of stone and the musical pillars. There are pillars that give you the seven Suras or Sargam. The sounds of Mridangam, Tabla, Jal Tarang, Ghatak, and many other instruments. Imagine sounds coming out of solid stone pillars. The temple is serenely placed by the river Tungabhadra.

At Tungabhadra here, you can see some stone pillars in the middle of the river. These are told to be dating back to Ramayana days when this place was called Kishkindha. The kingdom of Vaanar or monkey Kings Bali and Sugriva. At the bank is a temple dedicated to poet Purander Das and to date the devotees sing his poems every evening there. On the other side of Kishkindha, you can see small hills and the paths to reach the temple on top of those hillocks.

The Market that traded precious metals

There are small carvings of Ganesha on various boulders, giving a feeling on an unfinished task that some artist had started working on. The market had a typical design of a long corridor supported by pillars on both sides. It is said that these markets were there to trade in the precious metals like Gold and Silver along with Diamonds etc. Believe me, looking at those long barren corridors today, it is difficult to imagine that these places were once stuffed with jewels.

My first association of the place was with King Krishnadevaraya and Tenali Ram. One of his Ashta-Diggajas, whose numerous stories of wisdom I had read in my childhood. But surprisingly there was no monument that was associated with him. The guide said Tenali Ram was from Andhra. Probably that is why no one has remembered to keep his monuments intact. But he lived in Hampi was a definite given.

The roads in this place are well maintained, they are much better than Bangalore. The signs for various monuments are clearly written in English, Hindi, and Kannada. The signboards are well maintained, one of the rare sights on Indian tourist sights. The ASI and GOI are trying to renovate quite a few monuments with intent to preserve the rich heritage. I can not say it was clean as most of the developed world tourist locations. But it was cleaner than most of the tourist locations in I have seen in India. It could be because of the reason that we went just the weekend of the annual Hampi Festival.

What this destination requires are good hotels and a more accessible transport system. As of now, you have to depend on local transport which may be difficult to use if you are non-Kannadiga. Other modes like Auto-rickshaw and Taxi may not be within reach for everyone. The local people are very well tuned to the tourist culture in the town. The kids would come to you and ask you to click their pictures. Some of them will come dressed as some deity and ask you for money if you want to click their picture. Sadhus would give you a perfect pose as soon as you point your camera towards them. Actually, Divya also gave me some nice poses. I think best click out of the whole trip is one of her pics by the Tungabhadra.

Our guide Prasad was a nice person. Though like most guides he also started explaining things only when the tour was coming to an end. He asked everyone for money. But he was a local, born and brought up in Hampi and proud of being from that place. What was nice was that he could speak all the four south Indian languages and a few more. He was literally talking to every one of the tourists in their mother tongue. Though he could never figure out that I was a Punjabi. And the funny part was he kept referring to me as ‘Mem Sahib’, this was the first time these words were used to address me. Divya was my local language support. Without her, I would have missed half the things that I managed to understand.

Yes, we did manage to get ourselves a decent room in Hospet in Hotel Mallige. Which boasted of being the host of all the film stars who had come to Hampi for shooting ever. And the next day after clicking pictures to our heart’s desire. We ended our trip with a delicious Dosa at Hospet station. Next morning we were back in our very own Bangalore, and back to the twenty-first century.

Recommend you to read following Tourist Places in Karnataka on my Travel Blog. 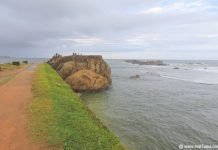 Places To Visit In Mahabaleshwar In Maharashtra