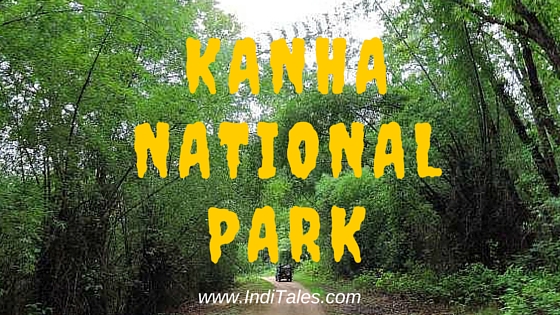 On the Eastern edge of Madhya Pradesh, almost bordering Chhattisgarh, Kanha National Park is a lovely jungle that gives you enough avenues to get lost in. Look at the options to feast on. The greenery of ubiquitous Sal trees, bunches of bamboo trees. Tall termite hills, herds of deer, langurs & Indian Gaurs. Rocky bed from which the trees seem to be coming out, vast green meadows. And of course the sounds of the jungle that includes various mating calls and warning calls. Trust the jungles to pack in some surprises for you that you may have never even dreamt of being witness to.

My distinct memory of the national park is these tall termite hills that could be seen anywhere in the forest. They were huge and they looked fragile as if they would melt with a few drops of rain. But to reach that height they must have survived many monsoons. To me, these termite hills looked like a metaphor for women – delicate and fragile in appearance but rock-solid in reality.

Next, is drive through dense forest that would suddenly open up to a lovely meadow or to a water body with deer’s drinking water from them. Tall Sal trees here seem to be coming out of dense black rocks that can be seen everywhere. You wonder if rocks have the fertility to let a tree grow out of them, but then when it is in front of your eyes, you cannot even question it. At other places, bunches of bamboos create the impression of a village with some of them tied together like a family. Canopies they create give the impression of the village streets. Sal and Bamboo dominate the jungle but we could spot the mango and guava trees and in June both of them were laden with fruits. Tempting us to jump from the jeep and pluck a few.

An intriguing observation was groups of trees in a perfect circle surrounding a central tree. When I saw it for the first time, I smiled at the geometric sense of nature. But when I saw it repeated at many places I knew it is something to do with man’s faith. I asked around, but no one knew if these trees have been planted in this fashion. Or trees themselves decided to grow in a repeating symmetry mode. Whatever the case may be, my mind is still looking for an answer.

Bright pink orchids hung from the tree trunks here and there, adding the brightness to the multi-hued green everywhere. Peacocks and other birds brought in their own vibrancy to the environment, both with their color and their flights across the forest.

Remember the National Geographic videos where a python swallows a big animal. I for one never thought I would ever witness anything like that, but on a morning safari, I got as close to it as possible. A Python was lying in a trench next to the safari path wrapped around the body of a full-grown langur. When you look at the picture it looks like it is holding a mouse, but it was a langur that it has killed maybe 10-15 minutes ago. Python’s face could be seen between the legs of the langur. And the length of the Python’s body was neatly wrapped around langur’s dead body. The signs of a fight were visible on both the bodies as blood was still oozing out of them. In fact, this is how we figured out that the killing has happened just a few minutes ago.

Our forest guide told us that the Python would keep tightening the grip on the prey until it is very sure that it is dead and ready to be his meal. He will then swallow the whole animal and the digestion would take a few weeks or maybe a few months. Until it needs the food again, it would just lie around lazily in the jungle. And does not move much till its stomach is full. Wonder if I would have also preferred a lifestyle where I can eat once a month and be done with my food requirements. It was an eerie sight to watch, especially with blood that was still coming out, but I am told this is an extremely rare sight to see in a jungle.

Jackal chasing a herd of Deer

Deer’s are always found in big groups in jungles. Even when you see a couple of them at the forefront, the others are probably hiding behind the trees or rocks. It is a sight to see them move in bunches in a jumpy motion across the jungle in unison. If you get to see them cross the water bodies, it is a delight. No wonder the Sanskrit poets always compared the walk of their heroines with that of deer’s. Once I was reminded of Sanskrit poets, I also observed the eyes of the deer that gave the Sanskrit objective ‘Mriganayani’ or meaning the one with eyes like a deer. They are beautiful.

This time at the national park, I saw a single jackal chasing away a herd of 50 or so deer’s. Delicate deer’s, some of them with antelopes on their heads jumped here and there as soon as they saw the jackal near them. We stopped for some time and watched this drama. It felt like a Kabbadi match with Jackal in the opposite team’s area daring them to touch him and pushing them out of their own area. The whole scene also told me that strength not always lies in numbers or even in size. It lies in the mind and that alone can defeat both the numbers and the size.

After watching Munna – the tiger, next morning we could hear the mating calls of the tiger including a couple of roars in the distance. We could also see three tigers moving swiftly – in a really long distant shot. This was the distance where I felt reasonably comfortable despite knowing the Tigers can cover it in no time if they are tempted enough. We did move around the area in the hope that they would make a closer appearance. But their priorities were clearly different at that time. Mating calls are not rare I guess, but for me, this was the first time I heard it – loud and clear.

This national park is known for Hard Ground Barasingha – subspecies of Swamp deer that is found only here. In fact, there is a huge breeding ground where they have been consciously bred in the last few decades. It seems the hard ground Barasinghas were on the verge of extinction with less than 60 of them left. Now there are about 400 of them and can be seen in the jungle roaming around. I am not too good with animals. The only way to identify hard ground barasingha that I could pick up was their shining golden brown color that is distinct from all other varieties of deer at Kanha National Park.

In a small herd of deer’s, we saw locking horns by two male deer’s, fighting for the attention of a female standing at a distance. And calmly observing them fight.

A few hundred meters away it was the turn of the Indian Gaurs to lock horns. Now, here I am not sure why they were fighting, or if it was really a fight or a friendly game. It was hilarious to see these giant bodies locking horns and then trying to push each other. Probably the game of wrestling was born after being inspired by this face-to-face fight off these massive animals. These activities of these wild animals in their natural habitat are what make the ride to the jungle enriching. It requires a bit of the resolve to leave the tiger alone or let the other jeeps run after him. And take the road less traveled to enjoy the vast diversity of the jungle.

Faith that Rules the Jungles

At the entrance of the national park, we saw a lot of small idols. I knew this has to be a local deity – probably a Gram Devta (presiding deity of a village) or a Van Devta (presiding deity of a forest). I was told that the deity is called Banjari Devi and is the local deity of the jungle. The name Banjari indicates some kind of a nomadic deity. It may be linked to some nomadic tribes of the region. Another popular deity in this region is Kher Mata who is particularly worshiped at Navratri and Dussehra time. I remember Kher Mata idols in the village that I visited in Bandhavgarh National Park.

There is a milestone like a marker that reads – Lapsi Shikari who died here in Jan 1930, with the story of a hunter who was killed here 85 years back. And he now lives here as a legend. There are memorial stones for the forest department staff that lost their lives while on duty.

All through the 3 safari rides, I felt the jungles and life at Kanha National Park talk to you – if only you stop to listen.

Recommend you to read following blog posts on National Parks of India on my Travel Blog.

Bandhavgarh National Park – Beyond the Tigers

What Type Of Traveler Are You? Read And Choose Yourself

Foodies Here Are The Must Relish Top 50 Dishes To Try...