Khatu Shyam was a discovery for me on this Jaipur Trip. I heard about it and safely assumed it is a temple dedicated to Krishna – for do we not call him Shyam. Khatu, I assumed must be some local legend associated with him. Well, Krishna is definitely a part of the story, but he is not the Khatu Shyam.

If you know Hindu religion even a wee bit, you know we have Gods for every possible rhyme and reason. I can make a long list of Gods to go to for every need, anytime or any emotion. Even then, I was unaware of this God – who is always there to support the defeated. He is called Barbarik and he always supports the one who is defeated. Popularly known as ‘Haare ka Sahara’ i.e. the support of the defeated.

Who is Barbarik or Khatu Shyam?

Barbarik is the grandson of Bhim – the second Pandav of Mahabharata. His parents are Ghatotkach and Maurvi. Ghatotkach was the son of Bhim and tribal princess Hidimba.

Since he was brought up by his mother Maurvi, he followed her advice always. Maurvi taught her son to be on the side of the defeated always.

When the Mahabharata war was declared, Barbarik, being a warrior wanted to participate in the war. On his way to Kurukshetra, he met Krishna. Krishna tested the powers of his triple arrow and was impressed.  He was now worried that if Barbarik fights, he would finish the war and be left as the only survivor. He also calculated that he would fight from the side that is being defeated and would be switching sides every day – leading to the same result. Krishna realized that Barbarik’s participation in the war had to be stopped. He wanted Pandavas alive at the end of the war.

Krishna asked for Barbarik’s head as it was required to begin the war – the head of a brave person was required as a war ritual. Barbarik agreed but as last wish, he asked Krishna that he wants to witness the war. Krishna then placed his head on top of a hill and Barbarik witnesses the whole Mahabharata War. At the end of the war, he was asked – who won the war? He said – Krishna. Everyone else was just acting as he wished them to.

Krishna gave a boon to Barbarik that in Kaliyug, he would be known by his name. This is how he got the name – Shyam.

It is said that the head of Barbarik was offered to river Rupawati by Lord Krishna Himself. The head was later found buried at the Khatu village in Sikar district of Rajasthan. It was discovered when a cow started giving milk on top of this head. It was handed over to a Brahmin who worshipped it and meditated on it to reveal the story.

Roop Singh Chauhan – the then ruler of the region then received an order to build a temple in his dream. Hence came the first temple of Khatu Shyam in 1027 CE. Temple was built on the 11th day of the Shukla Paksha in Phalgun month of the lunar calendar. It is the same day when Barbarik had offered his head to Krishna before the Mahabharata War.

In some versions of the legend, it was the queen of Roop Singh Chauhan – Narmada Kanwar who dreamt of the Khatu Shyam. A stone idol in unique black stone was also found. This is the idol that is worshipped in the main temple today.

He has the look of a warrior. Has big mustaches and there is a Veer Ras on his face. He wears fish earrings. His eyes are open and alert.

Khatu Shyam is not just the Kshetra Devata or regional deity of the region but a Kul-Devta or the family deity of many Rajput Chauhan families in and around Sikar.

We started one morning from Jaipur to visit the temple. Sunflower fields that were in full bloom in the month of August. A free-standing arch announced the village and it read ‘Shri Shyam Sharnam’. We drove for some more time, I was expecting a giant temple. But when we reached the temple from its back door, it was a tiny little temple.

We were just in time to get the darshan and got a glimpse of the idol in stone.

Outside the temple is another temple dedicated to Hanuman called Simha Pol Hanuman.

A unique thing I noticed here is hanging coconuts. Coconuts with a Mouli or red cotton thread bound around are hanging everywhere. These are wish-fulfilling or the votive coconuts. You can make a wish and tie a coconut here. Once the wish is fulfilled, you come back and untie the coconut.

A board outside the temple tells me that there is no temple head. The descendants of the Chauhan Rajputs take care of this temple.

The place where the head of Barbarik was found is now called Shyam Kund. It is a beautiful Kund. There are two Kunds or Ponds – one for men that are shown in the image above and the other one for women. This complex houses temple to Gayatri Devi and coconuts can be seen here everywhere.

There is an idol of Krishna with the head of Barbarik at his feet – in a way telling the story of the place.

I wish this was cleaner, it required a lot of faith to step into the premises.

Everywhere you go in the town you would see the three arrows. Most conspicuously you would see them on the cars. It says – Haare Ka Sahara, Baba Shyam Hamara. Meaning – The Supporter of the defeated – Our Shyam.

As I walked around the town and its small market I found souvenirs of all kinds with the triple arrow bow.

There are accommodations available in the town, but you can do this as a trip from Jaipur.

No photography is allowed inside the temple.

If you go on a normal day when the temple is not very crowded, you need 1-2 hours to see the temple and the town.

Recommend you read the following articles on Things to do in Jaipur.

Chand Baori at Abhaneri – Most photogenic Stepwell of India

Bhangarh Fort – Visiting the most haunted place in India

Bhimashankar Temple On Banks Of Bhima River Near Pune

Ancient Chandreshwar Bhootnath Temple Atop A Hill In Goa 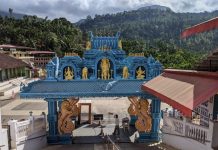