Tucked away in a corner, near Bogmalo beach at Vasco, is this unique Naval Aviation Museum, Goa dedicated to flying machines of the naval forces. I am not an army/military/war person. I often skip the armory galleries in museums. But this one promised to be more of a display of technology and more importantly an introduction to a subject I knew nothing about.

We landed at the museum as soon as it opened in the morning around 10:00 AM. Met many small helicopters and planes sitting in the lawns as if they are having a conference. A small plaque in front of each of them told about their make, year of manufacture, height, weight and carrying capacity. To my untrained eyes and mind, they looked like oversized toys. Especially when there were these young boys who were all over helicopters painting and doing minor repairs. However, I did notice the indigenous planes made by HAL, Bangalore among mostly imported ones. Some engines were resting in their engine bays. For more details refer to the Goa Tourism page on the museum.

A model named Chetak looked liked an auto of the aviation world, with a capacity to seat 5 and a condition that quite resembled our yellow black autos.

A Hughes machine with its bulbous front made me feel it is the Nano of Naval Aviation.

Inside the museum, there is a large exhibit model of INS Viraat. This was the best part of the museum, as I would have never guessed how it holds the number of aviation machines on its platform and within its belly. Real-life pictures of the same actually made me believe what the model was trying to tell me. A quote on the wall said ‘In the business of Aviation, Best is ‘Just Enough’’. You wish every profession took it that way. From the top floor, you get a glimpse of outside display in the backdrop of the sea. And that brings in a whole new perspective to the museum.

Other displays included – safety equipment like ejection seats and parachutes. War equipment like torpedoes, bombs, radars & rockets. Parts of the machine like the black box. Insignias of various units of Indian Navy. There is a picture gallery that covers the major operations done by the Indian Navy including the Goa liberation. A set of pictures takes you through the various uniforms of Naval officers. I liked the navy blue Sari for women officers with an elegant golden border. A short film is screened at 11:30 AM if there is power – unfortunately, the day we went, there was no power so we could not see the film.

A time capsule is planted right outside the museum – on the day museum was inaugurated in 1998. We were told it contains pictures of the place as it existed then. Instruction on the capsule says that it would be opened in 2048 to compare the two times. And maybe another capsule would be put in place. Interesting concept, I do not remember anything like this elsewhere.

There is a small cafeteria that sells basic foodstuff, souvenirs. And a bit out of place things like Hyderabadi pearls.

I have written about other important Museums in the state. Read and add them to your Places to Visit in Goa list. 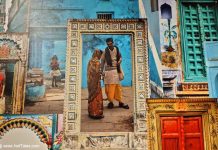 10 Best Professions To Travel Around The World