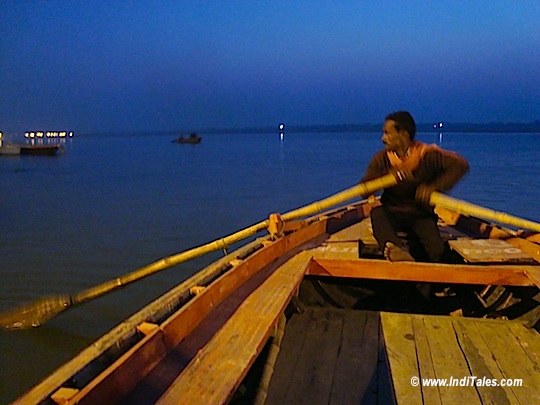 Ghats of Ganga in Varanasi is what cult places look like. Since time immemorial, this has been a place where travelers from all over converged. Where they met and exchanged ideas – while looking at life and death in one frame. Legends, myths, stories, and anecdotes pour out from every step on the ghats as the new ones are being made right in front of your eyes. It is a place that has nurtured creativity and allowed numerous arts & artists to flourished on its banks. It is a place where people come to die so that they achieve Nirvana. This is the place Buddha chose to give his first sermon and it is the place where my favorite poet Kabir lived.

Ghats of Ganga in Varanasi

People standing knee deep in waters with folded hands has become the signature image of Ganga Ghats in Varanasi. The expressions on the faces carry an emotion of devotion. For a lot of people across the Indian subcontinent, standing in the Ganga and praying with their hands folded is a dream come true – a mission accomplished before they die.

Let me take you for a walk on the ghats of Kashi.

Ganga flows from Gangotri in the Himalayas and hits the plains of India at Rishikesh and then travels through the plains till it meets the Indian Ocean at the Bay of Bengal. It is a revered river since the time the mythical Saraswati River disappeared and Ganga became the life-sustaining river for the region. Mythically she came on earth as a trickle from the Jata of Shiva. She is known to wash away all the sins of people who come and bath on her banks. However, have you wondered in her journey of thousands of kilometers from her source to see why is she revered only at certain places? Well, at Varanasi she is revered for here she flows northwards for a while – as if she is stopping and looking back at her source that can also be thought of as her maternal home, one last time.

In fact when the Banarasi people talk in a language that never gives a straight answer – it is often referred to as ‘Yahan to Ganga bhi ulti behti hai’ i.e they justify their language by saying that in Varanasi even the Ganga flows in reverse direction so it is legitimate to use a language that is not straight talk. The steep ghats on Ganga have existed since ages, though no one knows the exact date – a lot of ancient literature refers to these ghats. Stories of Harishchandra Ghat can be found in Puranas.

The Boats always invoke a sense of romance, a sense of walking on the waters that you otherwise can’t. In Varanasi, they become a part of rituals, a part of excursions, a part of recreation and sometimes a part of transportation too. Boats in Indian mythology refer to the vehicle that takes you on the other edge of Vaitarni River – the river between the earth and the other world. In folk and devotional poetry metaphor for going beyond the circle of life & death is ‘ taking the boat to go on the other side’.

At Varanasi, you find boats of all kinds. Big and small wooden boats parked at the Dashashwamedh Ghat where the spectacular evening Aarti takes place and the tourists go on to the boats to see it in full view. Early morning boat rides between the two burning ghats – Harishchandra Ghat and Manikarnika ghat, are very popular. The boatmen will pick you up from the designated ghat and take you for a ride showing you the ghats as the city wakes up and the devotees line up on their respective ghats. The temple bells are ringing; light music can be heard in the background just as the sun rays start playing with the waters of Ganga.

Though boat rides are available throughout the day not only to see the ghats but also to visit Ramnagar on the other shore of Ganga or to go on the other bank of Ganga that beach like Sandy, I strongly recommend an early morning ride. It is on this ride that you would see the divine spirit of Ganga and Kashi.

Video of a Boat ride on Ganga – Varanasi at Dawn

Watch the video clip of boat ride on Ganga at Dawn in Varanasi.

Boats selling everything that you need to do Pooja on Ganga can be found in the mornings. Just in case you reach mid-stream and realize you have forgotten something on the shore. These highly decorated boats keep moving in the waters looking at the boats full of people, in case anyone needs anything. Otherwise too, buying curios on a boat is an experience in itself.

Video of a young Boatman

Watch the video of this young boatman in Varanasi.

While walking on the Ghats of Ganga in Varanasi, I met this young boatman who could speak multiple foreign languages. All of which he had learned from the tourists or customers. It was lovely to have a chat with him and do this small video interview with him. It reminded me of a boat ride in Europe where the boatmen played the role of entertainers and told stories and asked questions throughout the ride making it very pleasant and memorable. Well, sitting and chatting up with boatmen in Varanasi is an equally insightful and entertaining experience.

In Banaras, you can also attend concerts in boats. Imagine listening to the music as you float on Ganga looking at the Rhythm of Chaos on the ghats of Ganga.

Life & Death at Ghats of Ganga in Varanasi

Philosophically what makes the ghats of Ganga a microcosm of human life is the co-existence of life and death on its ghats. I remember when I was passing through Manikarnika Ghat, the item song ‘Munni Badnam Hui’ was playing in the backdrop and in adjacent ghats, the life went as usual. Death is present here as a part of life. No wonder the people here have a carefree attitude as they understand there is no point getting worried about anything when you can see your final landing place all the time. You cannot but notice the playfulness in people and in the air, even though it is the most spiritual of places in the world.

To meet death, there are burning ghats, where last rites are being performed almost around the clock. These are open places, anyone can go, sit and observe the rituals and contemplate what life means in the end.

Their eyes sense better than any customer management in the world can. Then see them talk smoothly in a way that people are ready to do anything that Pandas tell them for whatever they promise. Be it salvation or a solution to their current problems.

Walking up and down on the steep narrow steps of the ghats of Kashi, you cannot miss the ubiquitous graffiti that at times looks like aesthetic Ghat art. There are messages in Hindi in the forms of Doha or two-line poetry. That usually talk about the importance and relevance of Ganga, a need to keep it clean and pious. The authorities have no doubt put these as part of the cleanliness drive. There is Shiva on the steps of Ghats and there are those Sadhus who are an integral part of Ganga Ghats. Sadhus dressed to perform, sadhus who know they would be the showpiece for the visitors. And Sadhus who play hide and seek with you – disappearing every now and then only to re-appear.

I even found a graffiti of a ‘Videshi Baba’ or a Foreigner Sadhu. That kind of reflected the segment of foreigners who come down to live in Varanasi for various reasons. And it anyway does not take much effort to fall in love with this ancient city.

The architecture of Temples in Varanasi

The architecture of temples attached to each ghat is unique. Almost like a piece of Varanasi owed by a community somewhere in India. Some look like a palace, while others are rather plain. It seems most established kingdoms of India has a ghat to themselves. Even the temples in town belong to different sects. And they look like a temple in their native places.

Colorful steps give each ghat eats own personality. As do the structures attached to them on the top. Every ghat has its own mythology and stories. A lot of them would need an individual post to their stories. However, it is amusing to see a temple half sunk in the Ganga or a tank by the river that is supposed to pre-date the River Ganga. Dhobi Ghats with their washings adorning the steps of the ghats and washing in progress at the steps near Ganga is a site that catches your eye for the symmetry and geometry that the spread out clothes creates.

Ghats in Varanasi is known for the food for the soul. But what about the food for the hunger after a long walk on the ghats. The only ghat, where I located food at was the Assi Ghat where a Dana wallah was roasting fresh Dana. And a peanut vendor was selling freshly roasted peanuts with a small packet of salt. Peanuts with salt are my vivid memory of a year of a childhood spent in Benaras. Dana is the healthiest snack that you can get on the streets – roasted grains with a choice of eating dry or with green mint chutney, with onions added on demand.

There were Gol Gappas and Aaloo Tikki cart and even a Momo Stall. But believe me, I did not see anyone eating Momos in two hours that I was there. The corner tea stalls are where everyone converges after they have walked, strolled and tasted the snacks.

My detailed post on Must Try Food in Varanasi

There are many German bakeries and eateries close to the ghats. Some of them overlooking the Ganga and the ghats. I ate one of my best Pizzas there.

Walking on the ghats in Kashi is like a looking at a slice of life – where devotion and playfulness co-exist. Here life and death co-exist. And the world converges for its own reasons and where everyone finds a reason to connect.

Recommend you to read the following tourist attractions in Varanasi.

On other Shore of Ganga

Making Of Bidri Art Metalcraft – Behind The Scenes