Majuli is the largest riverine island in the world, surrounded by the mighty Brahmaputra river on all sides. But that is not the only thing that makes it interesting. River island of Majuli is shrinking at a fast pace and may get lost over a period of time. Some surveys even estimate its life to be as little as 15-20 years. Only 150 years ago it used to be 1250 sq Kms and now it is just 450 sq Km’s. Due to constant erosion and the flooding cycle every monsoon, the island changes shape constantly. And life on the island has to change in tune with these changes. As someone told us, you cannot make a map of this island, because, by the time you print it, the shape may have changed.

It is an island not just physically, but in most ways that it exists. There is only a ferry connection to the island. This is the only connection people know ever since they can remember. A ferry comes from Jorhat’s Nimati Ghat 5 times a day taking anywhere between 60-90 minutes depending on the season. And returns there the same no of times taking double the time as you go against the current. The Ferry station on both sides keeps changing depending on how much water the river has and how it decides to flow. Usually, the position of the station changes 6-7 times a year. Everything comes into the island through these ferries only, be it vehicle fuel or food.

These ferries also transport vehicles along with people, most of which are motorbikes but there are cars too that the visitors carry along with them. Limited connectivity comes in the way of medical facilities being made available. Patients have to wait until the next ferry to reach Jorhat, the closest city which is about 3 hours away. Many times they are not able to hold for that long. It seems that the Govt of Assam wants to build a bridge to join the Island to the mainland. But people of the island are not very interested in having one. As a visitor, I think the peace of the island will be lost if it gets road connectivity.

The life on the island is completely dependent on the rains and the flow of the river surrounding it. We were told that during the rains the whole island gets flooded. Only a few high rise areas are visible. Every family on the island owns a boat or two that is used to travel within the island during floods. You can see them lying around almost everywhere. Every person knows swimming as that is a basic survival skill needed here. Most people here do their own farming and grow rice and vegetables but this is again dependent on what the rains and the river permit.

The Mishing Tribe at Majuli

Among its inhabitants are Mishing tribes that originally belonged to the Arunachal Pradesh, but came and settled here many years ago. The tribe we met told us that they used to do agriculture but the river floods have eroded their lands. And all they can manage to do is manual labor. The women weave Mekhala Chaddars and Gamchhas. They live in temporary bamboo huts that can be quickly dismantled when the rains come and re-built elsewhere. Visitors come to them for their homemade rice beer.

Most commonly talked about places to visit on the island is Satras. These are nothing but Ashrams or Maths as they are known in the rest of the country. These were set up by 15th-century saint Guru SankarDev. Though the original Satra setup by the Guru has already submerged in the river, there are many still operational that was set up by many of his followers. Satras are spread across the whole of Assam but somehow you get to hear about the ones that exist on this island. Satras are home to Brahamcharis called Vaishnavas, who have dedicated themselves to this school of devotion.

They live in dormitories. And engage in various occupations like making handicrafts or weaving or performing arts and some of them also do regular jobs. Satras own huge lands and the revenue from these lands belongs to the Satra. The local populations who donate a percentage of their harvest also support them.

The presiding deity of the Satras is Lord Krishna. Legend is that Lord Krishna came to Majuli with his wife Satyabhama, who thought that Krishna has brought her to his Dwarka. She asked him “Is this your Dwarka?” and Krishna smiled and said, “No, but one day it will be Dwarka too”. And the numbers of Krishna temples on the island justify the statement. The Ahom kings who ruled Assam from Sibasagar for nearly 600 years had set up various Satras. Some of the existing ones date back to 400 years. Each Satra has a Guru and few sub gurus who will succeed the Guru. All the Vaishnavs community members elect their sub gurus.

The daily routine of a Vaishnav involves getting up and doing the morning Puja in their own rooms. And then doing a morning Nam kirtan and Aarti at the common hall of the Satra temple. Post that they all do their respective jobs before gathering again the evening for the Aarti. Out of the 22 Satras on the island, only 5 are Brahmachari while the others have Vaishnava’s with families.

We visited the Auniati Satra that is the biggest one on the island. The hall, temple and the living quarters were as simple as they can be with clay floors. You are not allowed to take Shoes inside the Satra which is as expected. But you are not even allowed to open an umbrella in the Satra and doing so is counted as being disrespectful to the Satra. Auniati Satra also houses a museum and a library. This small museum has a good collection, primarily of artifacts, the Satra received as gifts over years from various kings from in and around the region, from British visitors and from the public.

Most remarkable item in the museum is a woven ivory mat about 6 X 3 ft. There are huge brass and silver utensils that were used by the various Gurus of the Satra. There is a pair of huge sleepers made of wood and we were told that one of the Gurus was a huge man. Then there are a couple of pairs made of ivory. You look at these opulent items and you wonder how rich the place must be when the Ashram gurus had such precious items at their disposal.

This Satra also has a library that has huge brass bowls that are used during the festival time for distributing Prasad. Books are primarily in Assamese. There are some rare manuscripts in this library. There is one that describes and documents all kinds of elephants. They did not allow us to see the manuscripts. But I hope that the National Manuscripts Mission has digitized them and made available to the public at large.

On the full moon after Diwali, known as Kartik Purnima, the Satras have a 3-day long Ras Leela festival. This is probably the perfect time to visit this place. There are many small festivals also that happen around the year. During these festivals, all the Vaishnavas take part in performing dance dramas. Some play the music, some put masks and play various roles while others do support activities. Men perform all the parts in the drama, though sometimes women also participate. Masks representing various mythological characters are an integral part of these performances. We visited a mask-making center where a young actor wore various masks and enacted various small parts. And what a talented actor he was. His body language changed completely with the masks that he wore from ferocious to seductive.

There is nothing much to see on the island, but here are a few reasons that can make you spend a few days there. This is one of the most pollution-free places in the world as it is completely surrounded by the river. And has hardly any polluting elements within the island. For the same reason, it is home to many species of birds. If you sit on the side of a road you would find many varieties of birds and butterflies playing all around you. Early morning, you can walk around the various water bodies that dot the island. You will get a feast of known and not so well-known varieties of both birds and butterflies. A lot of migratory birds also visit the island during winter months.

Life as our Ancestors lived

For Indians visiting this island may be like visiting India as it would have existed 100 years back barring a few new-age gadgets like mobile phones and TVs. You would have heard of this kind of living from your grandparents. For foreigners, there is a lot of exotic value that the place has. The Satras that is an unusual way of living, tribal villages with bamboo huts, weaving and lots of birds. Cycling in peace on kaccha roads that have almost no traffic. And living in peace on an island more or less cut off from the rest of the world. In fact, it seems that a lot of foreigners do take flights to India to visit this island.

Do not visit this island as a tourist as you may not find anything exciting to see. But you may find it interesting as a traveler if you can soak yourself in the place.

Recommend you to read the following places to visit in Assam on this Travel Blog. 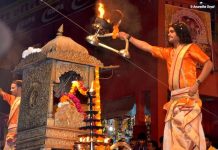 Romancing The Historical Prague City Of The Czech Republic

Explore Ramoji Film City On A Day Trip In Hyderabad