We all know Rukmini was the first queen of Sri Krishna. She is the one he first married, followed by Jambavati and Satyabhama. The popular image of Sri Krishna associates him with Radha more than any other Shakti in his life. When you go to Braj Bhumi it is all about Radha. It is more of Radhakshetra – the area where she dominates. When you are in Dwarka – it is all about her. Radha is present but most people bow down to Rukmini.

This was the first time I personally saw her prominence, I was intrigued. I heard her stories in Dwarka. And I visited her temple that still stands outside the Dwarka’s city limits. I saw the board’s announcing Rukshmani (that is how people of Dwarka call her) Vivaah or wedding. After I came back home did a bit of reading. And there is so much I learned about her – the princess of Vidarbha, the incarnation of Mahalaxmi and the Pattrani or primary queen of Sri Krishna.

The temple stands about 2 km away from the Dwarkadhish Temple in Dwarka. In fact, the temple is not even within the city limits – it is well outside the city. In the good old days, it may be a jungle where the temple stands. Standing alone next to a small water body with lots of birds in it, the temple probably belongs to 12th CE contemporary of the main part of Dwarkadhish temple.

The temple has a tall Shikhara that still has old carvings on it. I could see many Madanikas or beautiful women on a panel that goes across the Shikhara. The base is an inverted lotus, followed by a row of elephants. Niches have Vishnu images. A typical Nagar style of temple architecture is on display. A bright saffron flag flutters on top of the Shikhara.

The erosion of stone due to the proximity of the sea can be seen.

The mandapa though has a dome roof. I assume it is a medieval addition or replacement to the original temple.

When you visit the temple, the priest will first tell you her story and then let you enter the temple in a batch. Inside the temple, there is a lovely image of her and all around there are paintings depicting the legends associated with her.

The temple complex has a temple dedicated to Amba Devi, the Kul Devi of Krishna.

It is a small temple but it has its own personality, away from the city full of so many temples. It stands apart just like the presiding deity it houses.

Why is Rukmini Temple Away from the City?

The story goes that Rishi Durvasa, who happens to be the Kul Guru of Yadavas, had his ashram at Pindara – some distance away from Dwarka. Krishna and Rukmini went over to invite him for food with all their chariots. Remember, Rishi Durvasa was known for his bad temper and quick anger. He agreed to come but, on a condition, that the chariot would not be drawn by horses or any other animals but by Krishna and Rukmini themselves. They agreed.

Now she was a queen not used to pull the chariots. After a while her throat was dry and she looked at Krishna. He understood she needs water. He pressed his right toe into the earth and out came the Ganga. She had water. She was so thirsty that she forgot to offer it to Rishi Durvasa first. This made him angry and he cursed that the couple would be separated and live apart. This is why Rukmini’s temple is away from the Dwarkadhish temple. They are still living Durvasa’s curse.

Even at Dwarkadhish temple in Beyt Dwarka, she is present as the Mahalaxmi.

There is a small temple dedicated to her at Gopi Talaav.

They even say that Rishi Durvasa cursed that Dwarka would be infertile and nothing would grow here. That also remains true to this date – the dry land around Dwarka has nothing growing here. The man had worked around to mine salt here is another tale.

There are 3-4 popular legends associated with her that mostly come from Srimad Bhagwat.

Rukmini was the princess of Vidarbha – the area around the current day Nagpur. This is why she is also called Vaidarbhi. She was born to Bhishmaka – the king of Vidarbha. She was to be married to Sisupala – the king of Chedi. However, she had heard so much about Sri Krishna from so many people including Sage Narada that she has made up her mind to marry only Sri Krishna. In fact, Bhagwad Puran mentions that Rukmini thought only Sri Krishna is equal to her in Gunas or an equal match.

She is believed to be the most beautiful woman ever in Indian Scriptures. She is, after all, an incarnation of Mahalaxmi. As Laxmi, she is Narayan’s Shakti and as Rukmini, she is Krishna’s shakti.

She wrote a letter to Sri Krishna telling him about her intent to marry him. Rukmini asks Krishna to kidnap her when she goes to the temple through this letter. She sends this letter through a messenger. Different versions say that messenger was Hanuman or Garuda or Brahmin. Her letter is all of seven shlokas.

The printed version of this letter is available for anyone to pick at her temple in Dwarka. I picked up the Hindi version. Printed in Red on white paper, it has the original 7 Shlokas in Sanskrit with Hindi translation. Scholars can give hours of interpretation of these 7 Shlokas but you do get the comprehensive message that she has sent. She begins by praising him, by telling him she wants to marry him and then telling him the exact way to capture her in the middle of her wedding proceedings. She does not miss the possibility of war and bloodshed. In the end, she leaves a threat or you can read it as cajoling – if you do not come I will wait for births till you come.

This letter is still read every day at Dwarkadish temple before the deity is put to sleep. It is said that women who want to get married to their desired man should read this.

Krishna kidnapped her as per the plan. They got married at a village near Porbandar called Madhavpur Khed on the Ekadashi or the 11th day of the Chaitra month. Then they again got married in Dwarka.

Even to this day, the wedding procession goes from Dwarkadhish temple to Rukmini temple and marriage ceremonies are performed. The wedding takes place in Beyt Dwarka and Madhavpur Khed as well.

She had 9 sons and one daughter. Her son Pradyuman went on to become the successor of Sri Krishna.

The story goes that Satyabhama the third wife of Krishna was tricked by Narada to donate wealth worth Krishna’s weight. Satyabhama accepted and made Krishna sit on side of the weighing balance. On the other side, Satyabhama put all her wealth – all the gems and jewelry she had, but it could not match the weight of Krishna. She begged the wealth from other wives but still, nothing happened. In the end, she requests Rukmini to help her out.

She puts a single leaf of Tulsi Plant and the weighing scale tilts the other way. When everything but the Tulsi leaf is removed the scale still tilts towards the leaf. The message is that you can win Sri Krishna only by devotion not by wealth.

The tradition of Tulabhar still goes on in Dwarka. On the banks of the Gomti river, you can offer 7 types of grains equivalent to your weight. This is supposed to be one of the recommended things to do in Dwarka to attain moksha.

According to the Talking Myths portal, there is a story that brings her to Pandharpur in Maharashtra.

It is said that Rukmini, the chief queen had to be respected by all other Gopis and queens. Once Radha did not get up to show respect to her while she was with Krishna. This annoyed her and she left Dwarka in anger and came to Dindirvan which is now Pandharpur.

Krishna, his cows, Ganga, and Govardhan Parvat followed her. The two finally made up and served a feast of Kala – the dish made with curd and Maize to everyone present. The tradition of serving Kala still continues during the annual Pandharpur yatra.

At other places, she gets a mention when Sudama visits Dwarka. People wonder what has Sudama done to get fanned by Rukmini herself.

Do you know more tales of her? Tell me!

Take a look at the video I captured during my visit to Dwarka. 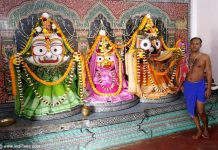 Things To Do In Krakow, Poland – Walking Around Old Town