Ajanta Paintings draw a lot of tourists to Ajanta, Maharashtra. Anyone who has visited Ajanta Caves and seen mural paintings there can but be in the awe of these caves. The caves are not only an engineering marvel as they are all manually excavated caves and not natural caves. These paintings have survived for 2000 years. Still, having the stories oozing out of them can not leave you without a mesmerizing emotion. I have visited Ajanta caves & Ellora caves many times as my father was posted in Aurangabad for some time.

However, I truly appreciated the mural paintings of Ajanta after I did my Art History course at the National Museum Institute at National Museum, Delhi. Then I got to visit the Ajanta caves and Ellora caves once again when I was touring Maharashtra & Goa with Deccan Odyssey Luxury Train. This is when I looked at these paintings with an art appreciator’s eye.

For this post, I will restrict myself to the paintings in cave no. 1. You hike up the little hill and admire the horseshoe-shaped row of caves that have been excavated around the turn of the Waghora River. The caves have been numbered in a sequence and do not really depict the sequence in which they were excavated. The groups of caves were excavated some 500-600 years apart. However without getting into the archeological details of which cave belongs to which period and why (which can be a full post in itself), in this post I want to take you through the paintings of cave no. 1.

Ajanta Paintings in Cave No. 1

This is a heavily painted cave and paintings are relatively well preserved – at least to an extent that you can understand them. Caves are very dark; it is not possible to see the paintings without the help of reflectors that have been placed at the entrance of the cave. Guides also carry some approved lighting that they briefly put on the paintings to show you the details. As you struggle with adjusting your eyes to the darkness inside you wonder how the painters painted such exquisite and detailed mural paintings in darkness. This remains an issue of

This remains an issue of inquiry for art historians. There is no consensus on it – especially now that they have timed the excavation and paintings to about 30-50 years time frame. Reflectors give light inside the caves but only for a couple of hours of the day. Any other lighting technique should have left its mark on the walls but no one has observed anything to that effect till now.

What are the Ajanta Paintings?

Thematically walls of the caves have Jataka Tales that tell the stories of Bodhisattvas painted on them. Bodhisattvas are the earlier Buddhas on the path to becoming a Buddha, not yet Buddha but still carrying some traits of Buddha. There are 550 or so tales and some of them can be seen painted and sculpted at all Buddhist sites. Besides Jataka tales, the Bodhisattvas and Buddha are also painted on the walls. Bodhisattvas can be any species – elephant, monkey, snake, swan, or a human being though it is never a female.

The ceilings do not have any religious stories or figures. They usually have decorative motifs with animal figures. You would see a lot of geometrical designs on ceilings in the caves. The logic behind this choice of place to paint stories is that stories can be understood while walking around on walls but not on ceilings. Corners are typically painted with demons in a smoky cloudy way in dark and dull colors. Indicating that demons do not have a fixed shape. And they can take any shape they want and they are also not benign beings.

Flanking a door inside Cave no 1 are two Bodhisattvas – Bodhisattva Padmapani and Bodhisattva Vajrapani. I am going to take the one on the left – the most famous face of Ajanta caves and point out its nuances to you. This would intuitively help you understand the other mural paintings on the walls.

This is Bodhisattva Padmapani – literally meaning the one holding the Padma or a lotus flower in his hand. Look at this picture for a minute or so and you can notice.

Now take a look at this picture in totality. It has all the signs of a materialistic being on it like a tiara, jewelry & fine clothing. Having said that, do you see the half-closed eyes full of Karuna or compassion? At the same time do they not look deeply meditative and dispassionate? This paradox is the beauty of this famous painting of Padmapani. It is sensuous and divine at the same time. It is materialistic and spiritual at the same time.

In the Vajrapani image look at the intricate design of his Kirit or Tiara – complex filigree work is depicted with perfection.

Jataka Tales paintings at cave no. 1

On the left side of Cave No 1, you can see the Mahajanaka Jataka painted which is the story of Mahajanaka. The king of Mithila who was born in exile grows up as a common man and comes to know of his royalty. He travels to Swarnabhoomi or Sri Lanka and marries beautiful Shivali. One fine day, he renounces everything despite being persuaded by Shivali and others against it. The scenes depict the story of Mahajanaka. On the right wall is Nanda Jataka which relates the story of a half-brother of Buddha who was taken to heaven by Buddha before he renounced the world and joined his order.

Here are some that I could gather

If you liked this, go on and read about Kailash Cave or Cave no 16 at Ellora

Influence of these Ajanta Paintings

It is said that these paintings’ influence can be seen in the paintings around the Buddhist world like Sigiriya in Sri Lanka, Dunhuang caves in west China, and Nara caves in Japan.

PS: This post is based on my notes from Prof Anupa Pande & Prof Vidya Dehejia’s classes.

Recommend you to read the following posts on Tourist Places in Maharashtra on my Travel Blog. 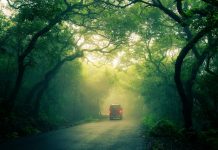 Places To Visit In Mahabaleshwar In Maharashtra

Ancient Kashmir During The 10th Century With Ashish Kaul

Ekla Chalo Re By Rabindranath Tagore