Street Art is the most visible form of art in any city. Lately wall graffiti or wall murals have become a trend in most cities. In Mumbai, you see the popular Bollywood scenes like street art in Bandra. Modern art in Bratislava streets almost talks to you. Hong Kong street Art has a curious mix of public and private installations and wall murals. I got to explore the contemporary Vancouver street art & modern art in various forms and formats.

After Capilano Suspension Bridge Park, the first place that I explored was the Vancouver Art Gallery. This gallery was a great beginning of my appreciation of modern art in British Columbia after relishing the ancient art of First Nations. I write about it in detail in my post on Things to Do in Vancouver Downtown.

Equipped with some knowledge I ventured into the streets and could spot a lot of art scattered around. I saw the wall murals or street art only in certain quarters but modern art installations were aplenty. There were a lot of markers of the Olympic games that were held here is 2010.

Pile of Cars or Trans Am Totem

The first sculpture that I noticed was something that might give you an impression of being in an accident scene. 5 cars standing on each other the way we usually keep our books piled on shelves. It takes you a few seconds to realize that it is just a sculpture when you see the rest of the moving along without a hitch.

This CBS article tells me that this piece of Public Art is actually up for sale.

House sparrows used to be so common that we never paid attention to them. Air pollution has driven them away from urban settlements. In the Olympic village set up for accommodating the visiting sportsmen, there are a few sculptures that retain the historic threads of the land. One of them is this Giant Sparrow sculpture. But for its size, it is a very realistic sculpture. I remember it was raining the day I was touring around the city and I almost felt like protecting this sparrow from getting wet. Next time I want to see some wildlife experiences.

Not too far from the sparrow above, between the tall skyscrapers are these lifelike piles of salt. These are the reminder of the times when salt was traded from this port. I think it is a brilliant idea to remember the heritage of the land you live on.

Driving through the falls colors of Stanley Park – I saw this big sculpture of a running man with the Vancouver city skyline in the backdrop. The sculpture is actually Harry Jerome Monument – who was an athlete with 7 world records to his credit. He was also a medallist at the Olympic games. What better way to inspire future athletes.

Girl in Wetsuit on a Rock – Stanley Park

A little ahead of Running man, sitting on a rock in the waters is a girl in the wetsuit with flippers in her feet and masks pulled up. Even when it is in Bronze, it feels like she has just come out of the water and is still trying to come out of the world she saw underwater, a kind of re-adjusting to the water above water. Sometimes it looks like the artist had a mermaid in mind, but then realism took over.

Keep moving in Stanley walk along the seawall and you would see a white sculpture with a colorful dragon head. The aesthetics are visibly Chinese, but I could not find any details about this sculpture. I just assume that it represents the Chinese community, which is the biggest immigrant community in British Columbia.

Lions of the Lion’s Gate Bridge

Lion’s gate bridge connects the city to North Vancouver. There are two larges lion images that you can see as you enter the bridge from the city side. However, you see the smaller versions of these lions towards the end of the walk at Stanley Park can be seen living a lonely life. I was told these were the original images of lions that gave the lion gate its name.

Read about the HSBC Lions in Hong Kong

Here comes my favorite Vancouver Street Art – A-MAZE-ING Laughter sculpture. This is a lovely sculpture in Bronze with 14 laughing men in the English Bay area. Artist is Yue Minjun of China and this sculpture was donated by Wilson family to people of Vancouver in 2009. A note near the sculpture reads – May this sculpture inspire laughter playfulness and joy in all who experience it.

I walked around this sculpture for a while – I was smiling and happy to see the hysterical laughter all around.

Second sculpture at English Bay is a giant Inukshuk. It is a larger version of the ancient sign in stone. You can find the smaller versions of Inukshuk all over souvenir shops. It is not really a British Columbia symbol, but it gained popularity because it was the symbol of Olympic games held in Vancouver.

I never knew that Jade is so popular in Canada or they have Jade mines. I could see a lot of souvenirs in Jade, but this sculpture is Jade left me awestruck. Can you even imagine how heavy it must be considering it is a solid piece of Jade around 5 feet in height?

After my fill of art installations around the town, it was time to explore visual art, design and crafts festival. I was fortunate to be in Vancouver when the Eastside Culture Crawl happens in November.

Eastside Culture Crawl is a lovely concept. Artists open their studios to the general public for 4 days. You can just walk in, see the artists working in their studios. You can talk to them and ask them questions about their work. Thanks to my friend Peter and his artist friend Johanne Galipeau I had an enriching experience of a unique artist studio walk.

On my last day there, we decided to walk to a few studios. Newspapers had the map of all the studios that are open to the public. The first look at that map and I wondered about the number of artist studios the city has. Check out their website for more details.

Johanne – an artist herself chose a few studios for me, as it was not possible to see everything. We started with the studio of Joachim Waibel who is expert at recycling things and converting them into a piece of art. We saw him recycle vinyl records, creating tables out of video cassettes, chess pieces from nuts and bolts of defunct mechanical Items and many other things.

Our next stop was a big studio that had big and small artist studios on its multiple floors. We started with a game of leaving a message on the balloon that would then join the other balloons on the ceiling. I think everyone loved it including me.

I met a paper cutting artist who could create beautiful art by just cutting a sheet of paper in the right way. Another artist recreates the rivers on wood by mapping the exact contours and then filling it with blue raisin. Yet another artist was carving the small pieces of wood that would be assembled to make abstract art.

My favorite part of the Eastside Culture Crawl was taking part in a public painting. It was a giant mural where everyone can come and paint a bit and become a part of the festival. I am no artist but I was inspired to be one. I wore an apron, picked up a paintbrush and left a small mark on the painting – an Om. This kind of completed my experience – from being an observer to being a participant observer.

The impact of Eastside culture crawl walk was that my head was bubbling with ideas. Creativity breeds creativity. I could think of so many projects and so many collaboration opportunities. I wish and hope that cities around the world take inspiration from this project and replicate this in their cities.

Is it not nice to return home with creative ideas? Thank you, Peter, Johanne and Vancouver City. 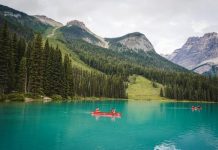 Whistler Canada – Things To Do In Ski Town Of British Columbia

Ashtamudi Lake – A Ride Across Lovely Backwaters Of Kerala