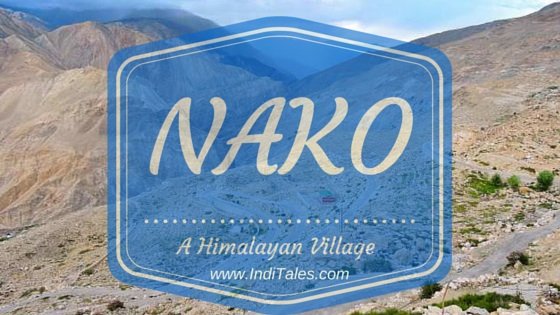 Nako is a small Buddhist village on a remote hill at the edge of Spiti valley. Technically it falls in Kinnaur district, but in character, it is far closer to the culture of Spiti valley. When we were driving the village, all I knew about it was that it has an old monastery and a lovely lake. I assumed it to be the base of many trekking routes and that it is. However, the village had an unusual surprise waiting for me.

Drive to Nako or Drive to Nowhere

Drive to the village was breathtaking. The road was relatively better than the rest of our Himachal adventure. As the Spiti valley approaches, mountains lose their green cover and stand threadbare. Naked is the first word that comes to mind when you look at those giant mounds of what looks like sand. These are fragile ranges; small stones keep falling on the roads. BRO (Border Roads Organization) does a great job of keeping the roads clear of these stones. But they have a tough task when they are fighting with such mighty mountain ranges. I remember the drive almost felt like ‘Drive to Nowhere’ as for miles together we did not see another vehicle and roads appeared to be leading nowhere. It is only the left-brain logic that said, if there is a road, there must be a habitation at the end of it.

First Sight of the village

After a while, we saw two villages perched on the tip of two different hills – almost sitting on the tip of the hill. The Buddhist character of the villages was evident from the colorful prayer flags fluttering in the air. I wonder if the practice of putting these flags was as such to signal the presence of the villages as much to protect from.

We reached the village and asked around for Kinner Camps, eager for some rest after a long drive. We find ourselves at the edge of the village overlooking the famous lake and with a panoramic view of the village. After freshening up, I enquired if a guide would be available to take me around the village and its famous monastery. I was promptly introduced to Prem Singh who preferred to be called Sahil. He started by telling me the etymology of Nako – that comes from Tibetan word Nego and means Tirth ka Dwar or the Door to a holy place.

We started our walking tour from the lake, as I wanted to take its Parikrama or circumambulation of the lake before it gets too dark. Lake turned out to be much smaller than I had expected. It was a small oval lake on one side of the village with a small walkway around it. The trees all around reflected in the water and made it feel like a green lake though I remembered it as a blue lake from the pictures that I had seen. This lake is considered holy lake as Guru Padmasambhava is said to have meditated here. No one is allowed to fish or bathe or swim or even put feet in this sacred lake.

It is a natural lake that is full during monsoons and recedes a bit during winters. That explains the presence of full-grown trees in the lake. It is a lovely little walk that lets you reflect while you walk with the reflections of the trees. Here and there you have to cross the water outlets that are bound to soak your feet. If you believe in the sacred spaces, this is their way of blessing you probably.

After the village lake, we entered the village to see the footprints of Guru Padmasambhava that are preserved in a temple that dates back to 6-8th CE. It looks quite simple from outside. Inside this temple is the idol of Guru Padmasambhava. And his footprints on a rock can be seen. There is a colorful large prayer wheel being rotated by a devotee.

Rinchen Zangpo also called Ratna Bhadra, is known as a great translator who translated all the Buddhist scriptures from Sanskrit to Tibetan. He is also supposed to have established 108 monasteries in this region in 11th CE. This Monastery happens to be one of them. There are two temples that are reasonably preserved. The main temple is dedicated to 5 Dhyani Buddhas who are represented by their designated colors:

The walls are profusely painted. On the left side is Vairochana Mandala and on the right side is Buddha Mandala. Paintings also date back to the time when the monastery was built i.e. 11th CE. I think it is safe to assume that paintings have been touched later for maintenance. Another temple belongs to Yellow Tara who is present here with 8 medicine Buddhas. Yellow Tara is the guardian deity of vaidyas or the medicine men. There is a Mandala in Boti language that is the local language of the village.

A new temple has been built recently. It was built when Dalai Lama came and stayed here for 7 days. It seems every village here has a new monastery built for Dalai Lama. Where he can stay if and when he comes to the village.

Walking around the village

Walking around the village, passing by the houses with white walls and blue-black framed windows and doors, I realized that the village has as many cattle as the human being if not more. Narrow lanes winding around the houses were full of animal dropping. Even with an almost absent sense of smell, I could feel the annoying smell in my nostrils. Stones with natural grooves in them were being used to keep water and fodder for the animals on the streets.

People of the village grow potatoes and Peas as their primary crop and in grains, it is ubiquitous Rajma. In fact, as soon as the Apple country ends, the Pea country starts in Himachal Pradesh. I was fascinated by the elaborately carved doorjambs of the old houses in the village. The prayer wheels here and there brought out the spiritual side of the villagers. Who would turn them inadvertently while walking past them as a matter of habit?

I noticed solar panels any many places in the village just like the piles of stones with sacred mantras carved on them. Some houses have a board by Spiti Ecosphere saying Solar Passive House. Implying Reduced Firewood consumption and carbon emissions.

Sahil, my guide tells me about the youth club and its activities throughout the walk. Members of this club take tourists for village walks and treks for a fee. The funds hence generated are used for village development. They have a small-tented office at the entrance with a cardboard board announcing the office. I later realized that it was the members of this youth club who helped our car out when it got stuck in the stone path while entering the village.

After the tour, I sat with Sahil to understand how the Youth club works. I must admit I was damn impressed by the work they do. They charge very nominally for their services like Rs 50/- per person for a village walk that takes about an hour or so of their time. The average size of the group is 3-4 people but they take individuals also as they took me. For a day trek to nearby Turtle rock, they charge Rs 200/- per person. And for a 2-3 day trek its Rs 500/- per person. Their guides have been trained by Himachal tourism. I saw their boards prohibiting tourist’s vehicle parking at places like Bus Stand or smoking near the monastery or lake. They also indicate that any form of indecent behavior will not be accepted in the village.

The funds that they generate, have been used in cleaning the village. In installing a beautiful bell tower on top of the hill – that is kind of becoming the signature element of this small village. While walking around he showed me various dustbins that they have installed. The cloth bags that they have distributed to replace the old polythene bags that were used. In fact, he kept picking up the trash as he walked me through the village. We met his mother on the way and she was sure proud of her son. This was my surprise at the place.

This village is a lovely example of living with ancient heritage, spiritual values and yet adopting modern thoughts and techniques for a quality life.

Read these travel blogs on Places to visit in Himachal.

Apple out to Prosperity – Story of Himachal Apple

The journey of Viceregal Lodge to Rashtrapati Niwas, Shimla

Drive to resolve the curiosity of Giu Mummy 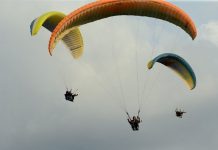