The celebration of Sao Joao Festival at Goa

Come the third week of June and the Goan’s are ready to jump in the well – literally. No, they are doing it for any wrong reasons. But to fish out the gifts hidden there on the occasion of Sao Joao. The festival that celebrates the feast of St John the Baptist. The wells are full of water around this time of the year. People enjoy jumping in the wells, in rivers or just dancing in the pouring rains. It could well be a rain festival in Goa. It happens in almost all villages in Goa around their wells, rivers, canals or ponds. In the more urban areas, swimming pools or artificially created ponds suffice for the purpose. The village of Siolim is famous for its Sao Joao celebrations. As it hosts a boat festival as well. This is where I went to see the festival.

‘This monsoon feast has special significance in Christianity as it is dedicated to St John the Baptist, the firebrand prophet. Christian scripture tells us of John the Baptist leaping for joy in his mother, Elizabeth’s womb when she was told of Jesus’ birth. John, the Baptist later went on to baptize Jesus in the river Jordan. The well is considered to be a representation of Elizabeth’s womb and a jump into it a sign of joy for the birth of Christ.’

As I reached the small rivulet in front of the pristine white Siolim church, I saw people wearing very colorful headgears. I was told these are called Koppel and are handmade using seasonal fruits and flowers. Simpler ones were roundels made of flowers that sat proudly on the heads. The heavier ones had fruits hanging from them all around. And sometimes so heavy that they hid the face behind them. The cherries and raw mangoes hanging from some Koppel’s were quite tempting. I was told that the new son-in-law of the family is given the biggest Koppel before he is made to jump into the well.

A small pandal had the local artisans performing. The host kept repeating Viva Sao Joao every few minutes. And the crowds responded with the same fervor. The decorated boats started coming towards the church. Due to insufficient rainfall, there was not much water in the canal. Boatmen had to pull the boat over very shallow water. Every boat was like a float with a theme and sometimes a message. One had mermaid sitting on top. Another had a giant crab, while the third one had another creature made on top. I liked a boat that had sunflowers made out of discarded plastic bottles.

I later discovered that these boats are competing for a prize at the end of the day. The program host introduced each arriving boat. Telling how many years that boat had been participating in the competition. Of the ones that I could follow there was a debutant and there was an old timer participating for almost 59 years. To me as a traveler, these boats added vibrancy with their color against the blue of sky and green of woods.

There were families dressed in similar outfits and Koppel’s walking through the shallow river. Though am not sure if this too is a part of the tradition.

Locals and visitors gathered around the canal to watch these boats and to enjoy the music and dance. People seemed to know each other and there was a mood of festivity. Though a tad bit dampened by the absence of rain on this day. I could not see any signs of commercialization of the event. Though Goa Tourism was doing its bit to promote the festival by inviting media from across the country.

In the end, I think Goans just need a reason to drink, dance and celebrate.

Other popular Goan festivals are Goa Carnival and Shigmotsav. 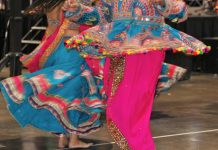 Ancient Shakti Or Devi Temples In Haridwar To Visit